There is something very personal about a handwritten note that cannot be replicated by any conventional writing app. Pens have always had a special place in history, be it for writing letters, calligraphy, or simply signing your name on an important document. Their feel, style, and way of writing were always important, so much so that they started becoming more and more decorated throughout the years.

Given the inherent beauty offered by writing, lets look at the 6 most luxurious and expensive pens in the world:

The Swiss company Caran d’Ache shows their grip on the history of writing instruments by literally basing their name after the Russian word for pencil (karandash), which in turn is derived from the Turkish "kara tash" (which essentially translates to graphite).

But historic knowledge is not what put this company on the map. Their supreme craftsmanship has led to some truly exquisite pieces such as the Caran d’Ache 1010, La Modernista Diamonds, and the stunning Gothica. To kick-off our list of most expensive pens we chose to feature the truly remarkable Gothica which encapsulates Gothic architecture with patterns of fleur-de-lis and rosettes, 72 emeralds, and 72 rubies in its design, along with approximately 900 diamonds embedded in the cap and the barrel. The luxury portrayed in this pen is a true testament to Caran d’Ache’s craftsmanship and cemented its place in our list of most expensive pens in the world. 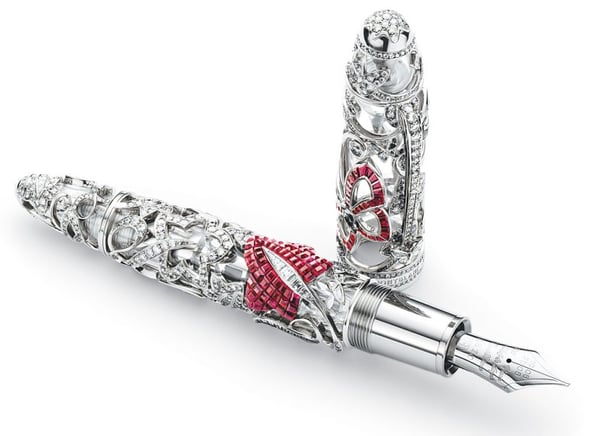 The Montblanc name and snow-capped mountain brand logo certainly need no introduction. For their 100th anniversary, the company partnered with Van Cleef & Arpels to produce, what is aptly named, the Mystery Masterpiece. Limited to just 9 pieces, the pen was first unveiled in 2007, it for the time, was the most expensive pen in the world, and for good reason. The entire body of the pen is made of white gold and its nib is made of 18k gold. The luxurious features don’t stop there though. There are over 800 diamonds and three variations involving emeralds, sapphires, and rubies along its body. This is truly a magnificent pen suitable for everyone who wants to write in style.

Yet another entry from Swiss brand Caran d’Ache, the Caran d’Ache 1010 Diamond Edition was designed with horology in mind. Its name comes from the time of 10 minutes past 10, which is believed to be the most aesthetically appealing position of clock hands on the dial. The body of the pen is cleverly covered in delicately crafted gears and is wrapped in a transparent case essentially mimicking the design of “skeleton” watches. The pen clip is also designed to resemble a clock hand and the nib is engraved with a gear design. There 1010 comes in three editions: silver, gold, and diamond. The Diamond Edition specifically is what we are featuring in our list of most expensive pens in the world and rightfully so, as it’s the first pen on the list to hit the $1 million mark. 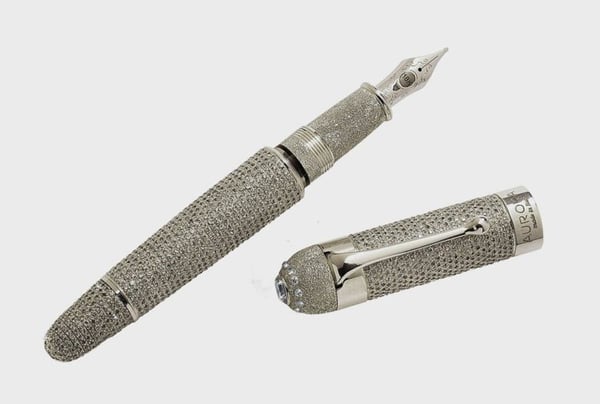 Feeling more like a jewelry piece than pen, the Aurora Diamante is an excellent combination of luxury, style, and craftsmanship. The entire body consists of over 2,000 diamonds, 1,919 of which are symbolically located on its barrel as a nod to the year Aurora was founded. The nib can be customized, allowing you to engrave your initials or your family’s coat of arms. Only one pen was ever produced, making it a truly exclusive piece worth every penny of its $1.47 million price tag. 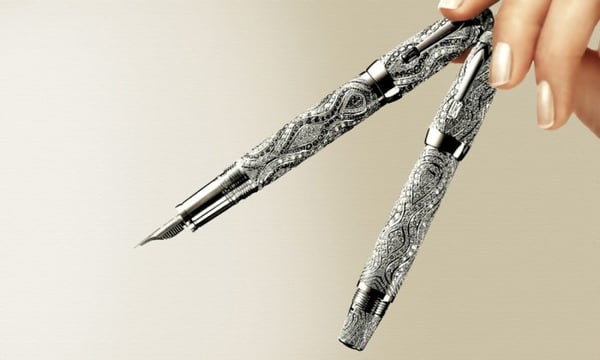 Of course, we would feature another pen from Montblanc. Part of their famous Boheme collection, the Boheme Royal is a pen comprised of 18k white gold with over 1,400 high grade, slightly colored diamonds embedded throughout its body. This slight coloration of the stones is what gives the pen its distinct look. The Montblanc logo is also customized,  and made by 18k white gold and 19 diamonds. Its unique aesthetics don’t end there. The Boheme Royal also retractable nib, something not really seen in fountain pens throughout the world. 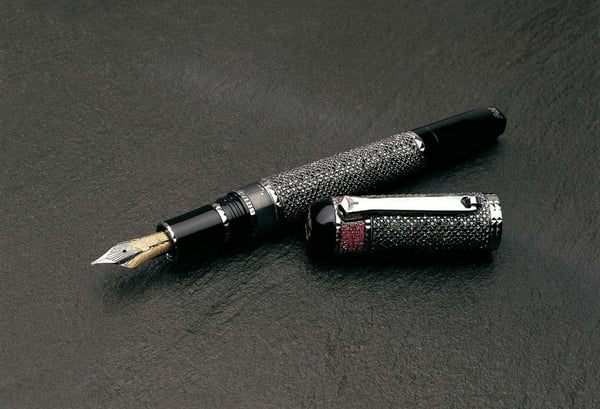 The world’s most expensive pen, the Fulgor Nocturnus (translated to “Night Glow”) is truly one of a kind. It was crafted by the famous Italian pen maker Tibaldi using the Golden Ratio, also known as the Divine Proportion of Phi. If this sounds familiar it’s because the Golden Ratio has been used in architecture, art, and can even be found in nature, and is considered to be the most visually pleasing proportion in the world. This ratio is most evident on the Fulgor Nocturnus when the pen is capped, resulting in a perfect 1.618 (the Golden Ratio) ratio between the length of its barrel and its cap. The pen is not only aesthetically pleasing mathematically , the cap and most of the barrel are covered by 945 dark diamonds.

And that wraps up our list. Are there any we missed? Do you have any questions? Let us know in the comments below.