We are in a new norm and instead of letting uncertainty confound us, we must adapt to protect ourselves financially. In this post we will be sharing some investment observations you might find useful during times of economic uncertainty.

Learning from the Past: Colored Diamonds as Stable Investments

In times of economic uncertainty, investors flock to strong tangible assets to secure their wealth. We have seen this time and time again with precious metals and other stable treasure assets.

The last significant time of financial turmoil was experienced during the 2008 financial crisis and subsequent recession. Colored diamonds, and in particular pink diamonds, saw a significant increase as investors turned to treasure assets to diversify and strengthen their portfolios.

What is the Best Alternative Investment for 2021?

They say "hindsight is 20-20." Could we pick up some subtle nuances from the past that may indicate a similar alternative investment influx today? As it turns out they do exist, and more particularly can be found not only in the diamond market but in gold, and sports collectibles markets too.

It is no surprise that we would be starting off our list by mentioning diamonds. Just like in the past, investors are turning to colored diamonds for a stable investment opportunity and safeguard their wealth. Take for instance the First Magnificent Jewels Auction of 2020 which set new records. This exceeded everyone’s expectations with a new price per carat record set for Fancy Intense Blue diamonds under 10 carats, and almost all other diamonds were sold near, or over their pre-auction estimates. Of course blue and pink diamonds were the undeniable stars for both Christie’s and Sotheby’s Hong Kong auctions.

Speaking of pink diamonds, let’s not forget the closure of the Argyle Mine. Responsible for 90% of the worlds production of pink diamonds, this mine closed in November, 2020. This is expected to cause an even greater shift in pink diamond supply, with some categories of pink diamonds (such as the Argyle Pinks) becoming finite. Increased demand and lower supply for these magnificent stones might provide a strong investment opportunity.

Precious metals have always been a favorite for investors, with gold being the “old faithful” most turn to. Having said that, this asset is extremely volatile.

During the past few months there have been upward movements in gold prices with gold settling roughly into the $18,000 range.  Depending on one's perspective, rising optimism in the U.S. about the vaccine for the virus and with election year uncertainties in the rearview mirror, gold seems to have stabilized.

Conversely, if the perspective is for more unrest, more uncertainty in the U.S. politically and economically, the expectation would be for gold to continue to rise.  Your perspective will dictate how you view the future of gold, but it worth repeating that putting “all your eggs in one basket” isn’t a very safe idea either.

While sports cards don’t have the perceived “prestige” of diamonds, gold, and other luxury assets, they have been significantly gaining investor interest, with constant records being broken in the past few months alone.

This can be highlighted well with one example.   Michael Jordan is a name known around the world even to those who have never watched a basketball game in their life. His most iconic card was the 1986 Fleer Michael Jordan Rookie #57. An undeniably rare and highly sought after card in PSA 10 condition; this Michael Jordan rookie (in January 2020) was commanding some very respectable prices ranging in the mid $30,000’s to low $40,000's for a PSA 10 (PSA 10 is the highest grade given to a card, ranging from PSA 1 through PSA 10). By the summer of 2020, these prices almost tripled, and PSA 10 versions of this card were selling in the mid to high $90,000's.

Fast forward to today...the value of these cards just continues to skyrocket, with PSA 10's reaching $738,000 at Goldin Auctions Elite January 2021 sale.  Given that he hasn't played a professional basketball game in almost 20 years, what moved the market? The combination of his ESPN series with the lack of live sports during the pandemic created a greater focus on alternative investments like these. 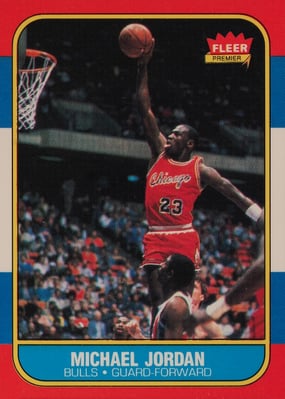 It's not just Michael Jordan.  The entire sports card market is hot.  Lebron James, another name known around the world. His 2003 rookie card sold recently sold for $1.8 million!

The impacts are being felt across all sports. In baseball for instance, a PSA 10 graded 1993 SP Derek Jeter rookie had been selling in the $50,000-$70,000 range as the last year or so.  Today prices have doubled, with the most expensive Derek Jeter rookie going for $200,000.

The records are not limited to cards alone. Unopened boxes, cases, and packs have also been making headlines, with the most recent auction bringing in millions of dollars.

On August 6, 2020, Collect Auctions made national headlines with the sale of some of the most sought after unopened items the hobby has to offer, including

No matter the sport, the same can be seen throughout the hobby world, with iconic sports cards, especially player rookies shattering their previous records in a matter of months.

Most new records started being broken around April-May and continue to today, those were the same months the Coronavirus had really started to impact the U.S. Coincidence? Not likely…remember, how colored diamonds started to take off during the previous recession? Could it be that sports cards will be another strong alternative investment candidate that will stand the test of time?

No one can be certain, but if history has taught us anything, the future of the sports collectible card market seems to be growing strong (stronger than ever).