How many times in your life have you come across a "million-dollar" investment opportunity? Or better yet, when was the last time you saw one emerge?  Were these "safe" opportunities or were they fraught with risk?

Right now, you may be thinking, "What does a million-dollar investment look like?"

How do you find out about them?

Are they publicly available?

Do I have to be on some special list?

How do I know that they are worth 7-figures?

Who doesn't want to be aware of potential million-dollar opportunities?  In this post, we are going to explore a variety of them and try to help you identify them when they are available.

Most investment opportunities are born due to circumstance, and let’s be honest, 2020 has had many (many) of these circumstances. So, which one do we go after?

Upon first thought, your mind might go to stocks, bonds, gold, oil, etc. But what all these have in common is volatility. Not the safest option (especially during times of economic uncertainty.) So, what’s next?

Many investors may think of real estate as the main alternative investment but this category also includes art, classic cars, aged spirits, antiques, sports collectibles and of course colored diamonds.   Below is a list of some million-dollar investments from these categories.

While these assets can be very solid investments, they typically lack a central marketplace, which can impact their liquidity.  Conversely, the asset type itself tends to be more tangible.  They can (and do) exist all around us.

Imagine finding an abandoned classic car in an old barn that you can patch up and sell for a million dollars.  That actually happens more frequently than you might think. The most recent example is from earlier this year, when a staggering 50 antique and classic cars found in a barn in Pennsylvania. In such situations, these cars can either be restored and sold, or auctioned off in their current state. Whichever the case though, these vehicles can go for very serious dollars.

How about finding a whiskey bottle owned by your great grandfather that had never been opened?  What about finding a painting up for sale by an "unknown artist" at a garage sale or a diamond previously thought to be a simple garnet...or sports cards just sitting in a box in your attic.  This was exactly the case for James Micioni who passed away at 97 years old in March 2020, and left quite a surprise for his relatives who were going through his possessions. What they found was a 1933 Signed Babe Ruth card that went on to sell for over $1 million.

The expression "finding a diamond in the rough" is not just about stumbling on something rare, interesting, and expensive. It could also refer to being able to find something as it's occurring, before it becomes so valuable...

Such was the example of the 2001 Bowman Chrome Ichiro Suzuki rookie card. Only 99 were made, all of which were redemption cards, meaning they were only redeemable for a short period of time. So how many people followed the "breadcrumbs" and identified this particular card to be so rare at the time? Practically none. A simple collectable card back in 2001, while not yet a 7-figure investment, could be worth over 6-figures today.  Does this become a 7-figure investment "tomorrow," it's possible.  We can all watch and see how this appreciates, but this highlights an example of a proverbial "diamond in the rough."

It's the ability to spot the "rough" that leads one to finding the "diamonds" and the potential million-dollar investments.

The stay-at-home economy has created a lot of possible places to find high end alternative investments.

Sports cards belong to a niche that at first glance might not share the perceived prestige of a 5-carat red diamond, a 1962 Ferrari, or a rare Picasso…

“But how?” you might be asking. The first examples are prestigious items, worth multiple hundreds of thousands, if not multiple millions! How can collectable sports cards even compete?”

Well 2020 came with many surprises, and one of these was a substantial jump in demand of sports cards which has only continued in 2021. This in turn has caused massive spikes in their value, with certain high grade cards selling for hundreds of thousands, or even millions.

So, it may be time you dust off that box full of cards you had been collecting when you were a kid, because you might just be sitting on a "goldmine."

Here are a couple of examples:

Lebron James is a name known around the world. His 2003 rookie card sold recently sold for $1.8 million! In July of 2020, this card became the most valuable basketball card in existence …but its title didn’t last for long, there was another even more valuable card sold just a couple of months later.

Giannis Antetokoumpo is a fairly new name in the sport, and yet his recent accomplishments have made his rookies highly sought after as well. In fact, his signed rookie sold for a staggering $1.812 million. This was the card that dethroned the Lebron James rookie. 2 record-breaking cards, in the span of just a couple of months (and in April 2021, this was overtaken by a 2003 Lebron James Upper Deck Exquisite Collection Rookie Patch Autographs card that sold for $5.2 million!). 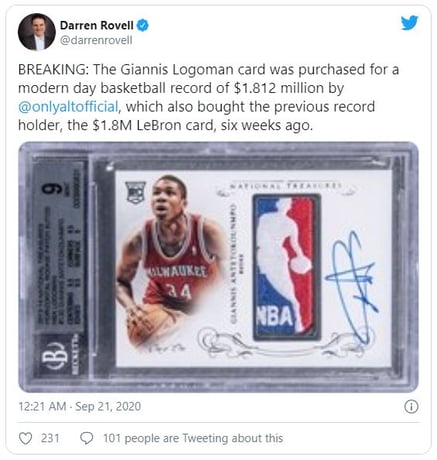 These numbers are not exclusive to basketball however. The impacts are being felt across all sports.

No matter the sport, the same can be seen throughout the hobby world, with iconic sports cards, especially player rookies shattering their previous records in a matter of months.

In August, 2020, a 2009 Bowman Chrome Draft Prospects Mike Trout Superfractor signed rookie card  sold for almost $4 million, breaking the record for highest priced baseball card ever sold (previously held by Honus Wagner T206 card at $3.12 million in 2016) and at that time, became the most expensive collectable sports card in the world.  The title of "Most Expensive Ever" only lasted a couple of months.  In January 2021, a 1952 Topps Mickey Mantle rookie sold for $5.2 million.  In fact, prior to 2020, only the Honus Wagner card sold for more than a million dollars.  Since the beginning of 2020, an additional 15 cards have crossed that iconic threshold.

Who would ever have thought that a whiskey collection could purchase a home?

This was exactly the case for a man in England who is planning to purchase a home using money from the sale of 28 bottles of whiskey his father gifted to him each year for his birthday.

It's a well known fact that the iconic Argyle Mine will cease production shortly.  Thus, the source of the gorgeous Argyle Red's and Pinks will be gone.  So where are these million-dollar treasure asset investments?  Again, most likely all around us.  The mine has been in existence for over 30 years producing these naturally colored beauties.  Given the finite nature of new ones entering the market combined with the uncertainty of global economic markets, it makes these hard assets even more attractive.

For readers of historical literature, you will no doubt recall the relentless pursuit of Captain Ahab and his white whale.  For many of us, the million dollar investment opportunity consumes us the same way.  Perhaps it doesn't have to be that way.  In reality, the million dollar investments are all around us if we know where to look...  if we have the resources to look... and the fortitude to find the proverbial diamond in the rough.

So let's leave you with these thoughts... do you know who to talk with to find million dollar investment opportunities?  Do you know where to look and what to look for?  Do you feel confident you can find them?

Your "million dollar investment" may already be sitting in your attic.  If it's not, perhaps it's just a phone call away... Regardless of your answers, Arpege Diamonds stands by, ready to offer you assistance.