Top 10 Most Expensive Wine Bottles of All Time

It seems that the term “aged like fine wine” is not exclusive to taste but to investment as well. Wine bottles are in that special category of investment assets that, much like colored diamonds and premium whiskeys, don’t seem to be significantly affected by the economic environment. Conversely, much like their taste and quality, their investment potential and wealth retention only seems to grow over time.

Without further ado, here are the top 10 most expensive wines of all time:

But what made this particular bottle so expensive? The short answer is quality and rarity. The 1945 Domaine de la Romanée-Conti, Romanée-Conti Grand Cru comes from the 4.5-acre Romanée-Conti vineyard said to produce the highest of quality red and white wines. Moreover, due to the weather conditions during that particular year, wines were very concentrated and production was really low. This means that only 600 bottles were ever produced, and most of them have been consumed today.

Such exquisite quality and immense rarity make this particular bottle worthy of its price tag, and well-deserving to be number 1 on any list with the most expensive wine of all time. 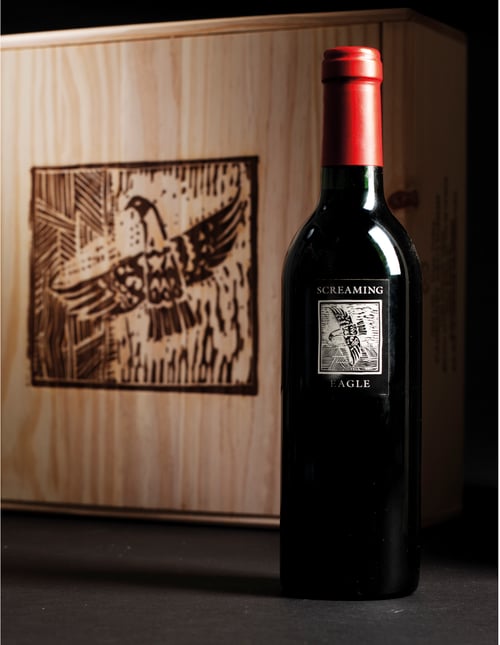 America has proven time and time again that it can produce wine comparable to that of France and Italy. Originating from Oakville, California the 1992 Screaming Eagle Cabernet Sauvignon was sold for a jaw-dropping $500,000 during a charity auction in the year 2000. Rarity and low production are not the only contributing factors to its price. The wine is aged in 60% new oak and is unfiltered while bottling, giving it a unique taste and amazing quality. An undoubtedly fine bottle that rightfully shares the title of one of the most expensive wines in the world. 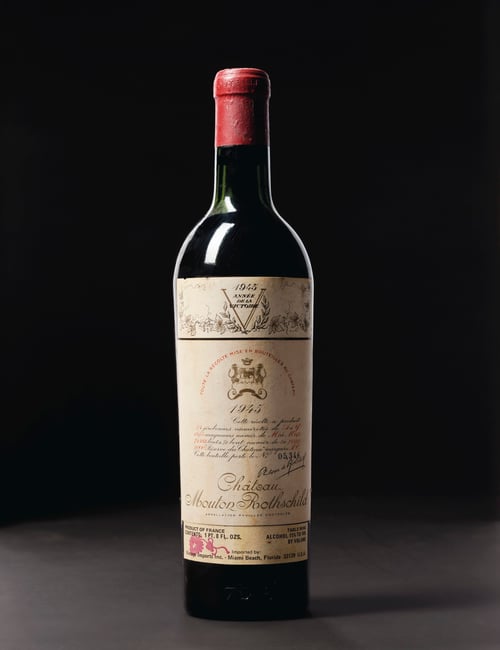 If the name sounds familiar, it’s because it probably is. This bottle comes from the vineyards of one of the richest families in the world, as Nathaniel Rothschild bought the estate in 1853. Today, bottles that come from this vineyard are considered to be among the most valued in the world, and this particular JEROBOAM OF CHATEAU MOUTON-ROTHSCHILD is no exception. The characteristic “V” in the label represents the victory of the Allied Forces in WWII, in 1945.

Considered to be one of the best vintage wines of the last century, a bottle would set you back $310,700, with a glass being around $8,631. A very expensive wine with an undoubtedly remarkable taste and history. 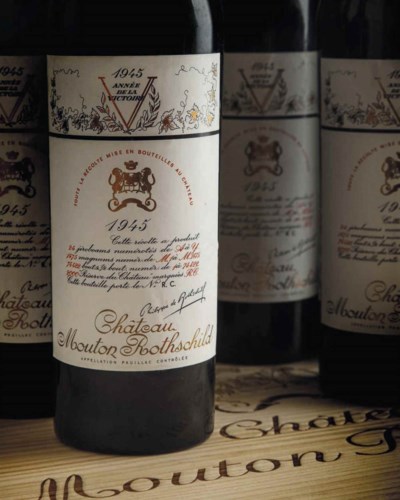 Coming from one of the most prestigious winemakers in the world, Chateau Cheval Blanc, this 1947 Chateau Cheval Blanc is considered by many to be the best Bordeaux ever produced. But why? Due to extremely bad weather conditions during its production year, the wine had to be made using primitive methods riddled with technical issues and flaws. One would assume that this would severely undermine the quality of the wine, but instead it created a product with a taste that could probably never be replicated again. As such, this 1947 Chateau Cheval Blanc fetched a massive $304,375 during Christie’s 2010 auction and cemented its place on the list of most expensive wine ever produced.

Sometimes an expensive wine is worth its value not only from its quality or rarity, but because it hides a story. Initially intended for the last tsar of Russia, Nicholas II, This 1907 Heidsieck went down with the ship it was being transported on in 1916. The cause? I torpedo from a German submarine during WWI. The bottle sat at the bottom of the freezing ocean for 80 years, undisturbed and away from sunlight. Thought to be lost to history, the wreckage was actually discovered in 1997 and all 2,000 bottles were salvaged.

The unfavorable conditions potentially make the contents of this 1907 Heidsieck “unenjoyable” but with such a history there is no question why people would want to add it to their collection. Each bottle costs a well-deserving $275,000. 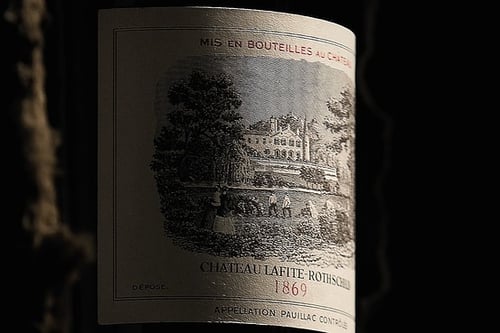 A “hidden gem” during the 2010 Hong Kong Wine Frenzy Auction, the 1869 Chateau Lafite was expected to sell for a “mere” $8,000. Instead it went on to fetch $230,000 setting a new auction record. These bottles are rare, especially in Asia, driving their demand (and price) higher and higher.

Another bottle with a unique history behind it. This particular 1787 Chateau Margaux bears the initials and once belonged to a very famous oenophile, Thomas Jefferson. Yes, the 3rd President of the United States was a known lover of wine and bought this very bottle during his time as ambassador to France. The bottle was bought by William Solokin for a whopping $225,000. Unfortunately this fine and very expensive wine had a tragic ending. Solokin had taken the bottle to a Four Seasons Hotel for a dinner celebration when a waiter accidentally bumped the table, making the bottle shatter to bits. 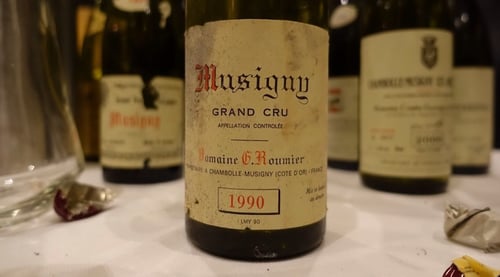 Leading French wine critic Michel Bettane once said that the 1990 Domaine Leroy is a welcome reminder of the difference between good and great. A true testament to quality and taste, this fine wine is considered by many to be among the best in the world. Its layered subtlety and extreme rarity make the 1990 Domaine Leroy Musigny Grand Cru worth every penny of its $224,000 price tag. An expensive wine with an unrivaled taste. 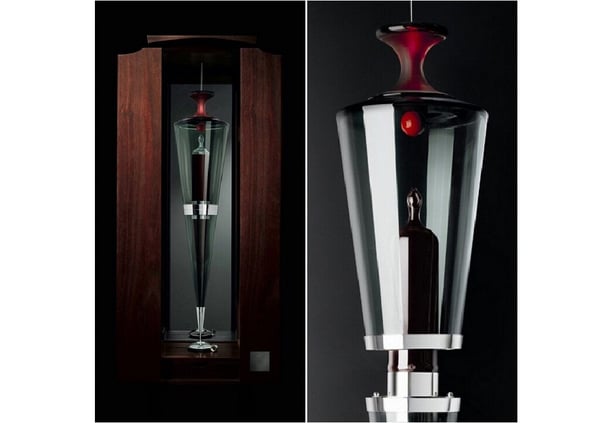 A post-2000s bottle on a list of the most expensive wines ever produced? Why, yes. This is no ordinary wine however. Consumption is an experience in itself. The bottle is nothing like the traditional shape we are all used to. Instead, the wine is stored in ampoules with no cork or screwcap. In fact, there is no seal whatsoever. The only way to enjoy the wine, is to actually break off the end. Senior winemaker staff will actually accompany buyers to their place to aid with the process. The wine itself comes from Penfold, the most famous winery in South Australia.

To date, the Block 42 Cabernet Sauvignon ampoules are the most expensive wines to be retailed directly from a winery, with each bottle costing $168,000, while a simple glass can set you back $850.

Another entry initially owned by Thomas Jefferson, this too had a rather tragic ending. This 1787 Chateau Lafite was discovered in a cellar in Paris, 200 years after the 3rd President’s passing. The bottle, etched with the President’s initials was ultimately bought by publisher Malcolm Forbes (yes, that Forbes) in 1985 for a jaw-dropping $156,450. In order to display his new possession, Forbes placed the bottle in a display under halogen lights. The heat caused the cork to dry out and fall into the bottle rendering a once historic and expensive wine worthless.

That's our list of the top 10 most expensive wines of all time.  Are there any bottles you think should be on our list? Have you tried any yourself? Let us know in the comments below.