Waltham pocket watches are among the most historic American timepieces money can buy today. Their precision engineering and craftsmanship put them on the map, competing directly with high-grade pocket watches from Europe that were, at the time, dominating the market. Not only did they revolutionize the way watches were built in the mid-1800s, but they were among the first “railroad grade” pocket watches to ever exist.

How Can You Identify A Waltham Pocket Watch?

There are a few ways that you can identify the authenticity of a Waltham pocket watch.

First, you will need to open the back cover of the watch and look for "A.W.W.Co." and "Waltham, Mass.” in the inner workings of the watch. A loupe or magnifying glass might be necessary for this one. This will also indicate the watch’s grade. For example, a Riverside grade watch will show "A.W.W.Co. Riverside Waltham, Mass." 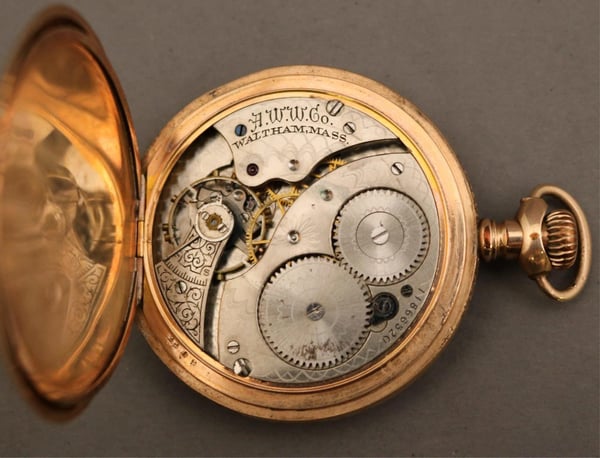 Finally, if the pocket watch has a cover, look for "AWco" written on the inside. This will indicate that the cover was also made by Waltham. If there is a "K" with a number, it means that the case is made of gold, with the number indicating how many carats it is. For example, "K18" means the case is made out of 18-carat gold.

What Is A Railroad Grade Pocket Watch?

Following America’s great train disaster in 1891 which was caused due to a faulty timepiece, Waltham, along with Elgin and Hamilton (two other famous watch producers of the time,) started produced watches to a new set of standards known as the “railroad standard.” To qualify as railroad standard, the watches needed to meet certain criteria:

How Much Is A Waltham Pocket Watch Worth?

An antique Waltham pocket watch can be anywhere between a few hundred dollars to a few thousand. It highly depends on the condition of the watch. Antique items such as these need great care to maintain and keep in tip-top shape. As such, there are plenty of Waltham pocket watches out there that are worth so little, they are essentially just used for scraps, but there are times when a true investment grade pocket watch comes up at an auction and ends up selling as a top lot.

How Are Waltham Pocket Watches Valued?

There are numerous ways Waltham pocket watches are valued.

Which Was The First Ever Waltham Pocket Watch?

The first Waltham pocket watch ever made was the Waltham Model 1857. As its name implies, it was produced in 1857 and was the first watch to be mass-produced and be made with standard parts. Prior to 1857, pocket watch parts varied from piece to piece making production and repairing very difficult and expensive. Most watches during that time were also made in either England or France, making the Waltham pocket watch a testament to America’s manufacturing and quality.

The majority of Model 57 pocket watches were made with coin silver, which is 90% pure.

Did Abraham Lincoln Own A Waltham Pocket Watch?

Yes, Abraham Lincoln did in fact own a Waltham pocket watch. Upon the Gettysburg Address, the 16th President was presented with a Waltham pocket watch model 1857, serial numbered 67613. The watch is currently on display in the National Museum of American History at the Smithsonian Institution in Washington, DC. 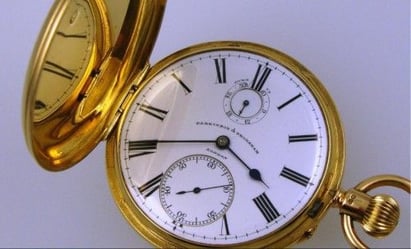 As with most antique items, preservation is key. A well-kept Waltham pocket watch will most definitely still be operational even today.

Why Was The Waltham Factory Important?

The Waltham factory was important because it revolutionized the way pocket watches were made in America. In 1849 Aaron Lufkin Dennison, Edward Howard, and David Davis joined forces to create a company capable of mass producing watch movement parts. Prior to this all watches produced in America were handmade. This made building and repairing them time consuming and expensive.

Waltham’s vision of having watches with interchangeable, standardized, parts would cut down on time, production, and repair costs significantly.

The company opened its doors in 1852 and remained in operation until 1957. During that time, over 40 million fine watches, pocket watches, clocks, and other precision instruments were produced. It was without a doubt one of the most prolific American watch companies and by the early-1870s Waltham watches were winning prizes all over the world.