The Graff Hallucination Watch: What You Need To Know

Over the years Graff Diamonds has showcased absolutely breathtaking pieces, including the $46 million Graff Pink diamond which held the record for most expensive pink diamond in the world for multiple years in a row. This famous pink diamond was not the only record holder from Graff, however…

On the first day of Baselworld 2014, Graff unveiled their timepiece collection, and one “watch” stood out among the rest, the Graff Diamonds Hallucination. 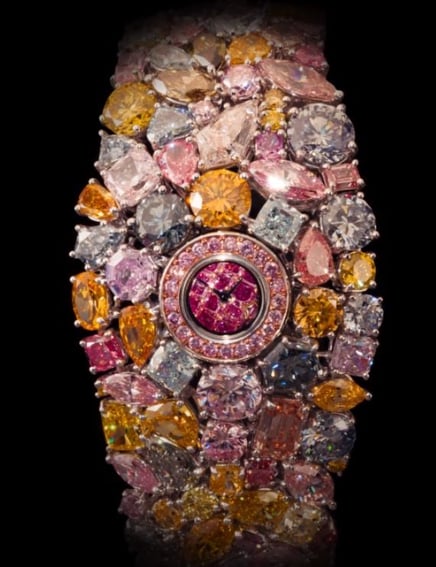 Disclaimer: Arpege Diamonds does not own this image. All rights belong to graffdiamonds.com

How Much is the Graff Diamonds Hallucination Watch Worth?

Priced at $55 million, the Graff Diamond Hallucination currently holds the record for most expensive watch ever made. The term “watch” though can be used very loosely here. Amidst the myriad of breathtakingly beautiful diamonds, a small quartz dial surrounded by small pink diamonds can be seen right in the center of the piece.

Why is the Graff Diamonds Hallucination Watch So Expensive?

The value of this timepiece does not come from the quartz dial embedded in the center, but by what is surrounding it. More specifically, the Graff Hallucination is comprised by a multitude of Fancy Vivid Yellow, Fancy Intense Blue, Fancy Light Grey Blue, Fancy Green, Fancy Orange, and of course Fancy Intense Pink, and Fancy Light Pink diamonds. Altogether, the diamonds on this watch weigh a staggering 110 carats. To add to its beauty, a large variety of cuts have been used, including marquise, radiant, pear, round, and heart-shaped diamonds.

Despite the quartz dial not being the piece de resistance, it is by no means just for show. The tiny dial is incredibly precise when it comes to telling time and doesn’t require frequent winding or power reserve. It is a long-lasting, accurate, and beautiful piece of equipment, turning the entire watch not only into a remarkable accessory but a practical one for a very lucky lady.

How Did the Idea of the Graff Hallucination Watch Come to Be?

The idea behind making this record-setting timepiece came from Laurence Graff, the Chairman of Graff Diamonds. He stated that:

“For many years I have thought about creating a truly remarkable watch that illustrates our all-consuming passion for diamonds. The Hallucination has made my dream a reality.”

“The Graff Hallucination is a sculptural masterpiece, a celebration of the miracle of colored diamonds.”

Why Did Graff Diamonds Make the Grand Hallucination Watch?

Graff wanted to showcase the company’s authority, excellence, innovation, and skill in the diamond industry, from manufacturing to retail, and the Graff Hallucination was an excellent piece to display their superiority. While a team of top diamond cutters and specialists is a key to Graff’s success, there is another factor that helps the company excel at what they do. Laurence Graff is the controlling shareholder in the South African Diamond Corporation (SAFDICO) which is one of the biggest diamond producers in South Africa. Sporting the largest polishing and cutting factories based out of Johannesburg, Graff picks only the absolute best stones to create their jewelry.

What do you think about the Graff Hallucination watch? Are there any other famous watches you would like us to cover? Let us know in the comments below.