The Arpège Tribute to the Breathtaking Pink Diamonds (Part 2)

Our love for pink diamonds made the creation of this list an extremely challenging task as we could have easily included vast number of pink gems of all shapes, sizes, color grading, and time period. Here are six of our favorite pink diamonds that managed to leave an everlasting mark in the history of colored stones. 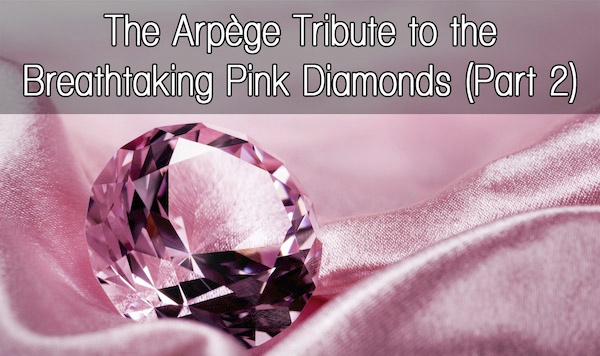 This 22.84 carat, marquise cut, internally flawless, purplish pink diamond is undoubtedly a piece of art. However, being a relatively new discovery among pink diamonds, very little (if anything) is known about its origin, date of discovery, and original owners. Currently owned by the renowned London based Graff Diamonds Corporation, the stone is believed to have been cut and polished by Graff themselves, and presently is set in a beautiful platinum ring. 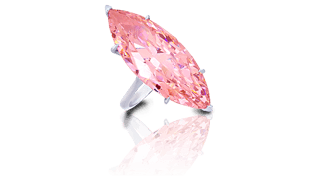 Even though we currently do not know much about this diamond, its size coupled with the rarity of its color, and clarity of its polish will without a doubt make it part of history’s most beautiful naturally colored stones.

This diamond is historic not for its background, but for its accomplishment. Initially 24.78 carats, the diamond was bought by Laurence Graff during 2010 and made the bold decision of further polishing the stone (a very risky move). The result was a breathtaking 23.88 carat, internally flawless, IIa graded, rectangular cut, Fancy Vivid Pink diamond. The diamond set the record for being the most expensive pink diamond to ever be sold at an auction. The stone fetched $46 million (yielding approximately $2million/carat) during Sotheby’s 2010 Geneva auction. 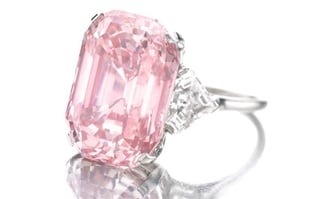 The Darya-i-Nur (aka the Sea of Light) is a light pink, table cut stone, and apart from being the one of the oldest naturally colored diamonds, it is also the largest pink diamond up to date. Unable to extract it from its setting, the diamond is estimated by GIA gemologists to be between 175-195 carats. 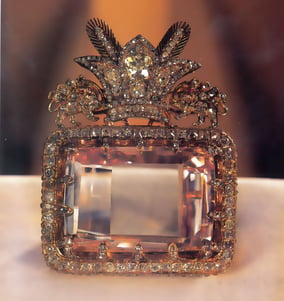 Originally from India, the diamond was initially owned by the Kakatiya Dynasty during the early 11th century, and was ultimately given to the first Moghul Emperor of India after being stolen from the former by the Khilji Dynasty. The stone was eventually looted by Nadir Shah, King of Persia, who invaded the cities of Agra and Delhi during 1739. During the reign of King Naser al-Din, the diamond was set in a beautiful frame accompanied by 457 smaller diamonds and 4 rubies that lie between a lion and the sun, both symbols of the Aryan origins of Iran. Today, the stone still sits in this exact frame and is the most celebrated diamond among all Iranian Crown Jewels.

Considered the sister stone of the Darya-i-Nur, the Nur-Ul-Ain (aka The Light of the Eye) is an oval brilliant cut, light pink diamond, weighing 60 carats. Like the Darya-i-Nur, it was looted by the Persians after their invasion of India during 1739. The stone is currently the centerpiece of a beautiful platinum tiara accompanied by 324 pink, yellow, and colorless diamonds of varying shapes and sizes. This magnificent piece belonged to Empress Farah, the last Shah of Iran.

It is believed that both the Darya-i-Nur and Nur-ul-Ain have been cut from the enormous 400 carat, table cut, pale pink diamond known as the Diamanta Grande Table. This theory was first thought up by Jean Baptiste Tavernier, the renowned 17th century French jeweler and traveler, who claims to had seen the stone at the Golconda mine in South India during 1642. Three centuries later, this theory was confirmed by a team of Canadian gemologists from the Royal Ontario Museum, during their examination of the Iranian Imperial Jewels during 1965. 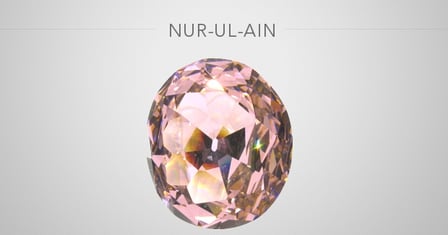 This historic stone owes its name to Hortense de Beauharnais, Queen of Holland. Originally from India, this pentagonal cut, pale orangey-pink diamond weighs 20 carats and has a distinct crack extending from the edge of the girdle towards the culet. (A culet of a diamond is a point at the base of the pavilion, where the facets of the pavilion meet.) Initially listed as part of the Crown Jewels, this stone was among those which were stolen amidst the French Revolution during 1792 from the Royal Treasury. 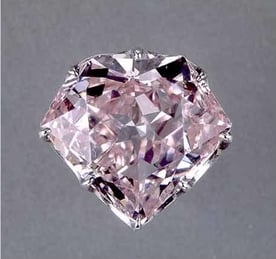 A year later, in an attempt to save his life, a man who was about to be executed disclosed that he had a bag hidden in the attic of an old house in the Halles district. Surely enough the Hortensia was among the jewels that were recovered, and was ultimately set in Napoleon's epaulette braid. During 1830, the diamond was stolen once again, this time from the Ministry of the Navy. However, it was swiftly recovered. Presently, the Hortensia is on display in the Louvre.

Originating from South Africa, this precious stone was initially sourced by De Beers in 1999 and weighed a hefty 132.5 carats. The diamond rough was eventually bought by the Steinmetz Group during 2003, by whom it was cut and polished to its present size and beauty. This truly magnificent oval mixed cut, 59.60 carat, internally flawless, Fancy Vivid Pink stone with an IIa grading was ultimately given the name Steinmetz Pink.

Four years after its transformation, the stone changed hands one more time and was purchased by an anonymous buyer for an undisclosed price. The new owner changed the stone’s name to Pink Star and entrusted it to Sotheby’s auction house to be sold at a later date, positive that the diamond’s beauty would fetch an admirable price.

Surely enough, the Pink Star was presented at the Sotheby’s Magnificent Jewels Sale held in Geneva on November 13, 2013 and was sold for a jaw-dropping $83 million; the highest price ever offered for a jewel at a public auction. Unfortunately however, the hype was short lived as the New York based diamond cutter Isaac Wolf who had successfully bid for the diamond, reneged his purchase shortly after. This led Sotheby’s auction house to reclaim the stone which remained part of their inventory for the next 3 years.

The stone was eventually sold during Sotheby’s April 4, 2017 Hong Kong auction for a massive $71 million, far exceeding its $60 million pre-auction estimate. This did not only make it the most expensive pink diamond in the world, it was now the most valuable colored stone ever to be sold at a public auction, essentially dethroning both the Graff Pink and Oppenheimer Blue respectively.

This concludes part two of our Pink Diamond Tribute. In the upcoming post, we'll be examining the appreciation of pink diamonds during the past decade, and what constitutes them a good alternative investment.