The Pink Star: The Diamond That Shattered Auction Records

The Sotheby’s Magnificent Jewels and Jadeite Spring Sale was hosted by the Hong Kong Convention and Exhibition Center, during April 4. Over the years we have seen Sotheby’s Hong Kong host a plethora of outstanding jewelry pieces, as well as breathtaking stones, and 2017 was definitely no exception. 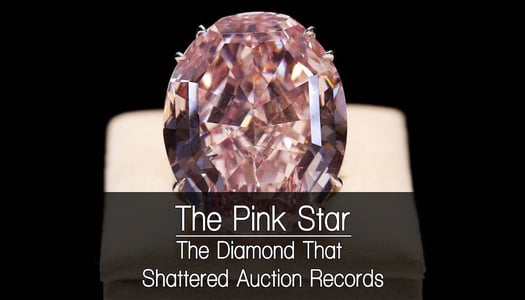 This year’s auction was led by the Pink Star diamond; a 59.60 carat, oval mixed cut, Internally Flawless, IIa graded, Fancy Vivid Pink masterpiece. These attributes do not only make the gem seem like a treasure among treasures, but they also make it the largest diamond of its kind to ever be graded by the GIA.

Sourced by De Beers from a South African mine during 1999, the diamond initially weighed a sizable 132.5 carats. During 2003, the rough was acquired by the Steinmetz Group where it was processed, cut, and polished to its present shape and size. Four years later, the Steinmetz Pink, after private negotiations, was sold to an anonymous buyer at an undisclosed price. The newly named Pink Star diamond was ultimately entrusted to Sotheby’s auction house to be sold at the Magnificent Jewels Sale held in Geneva during November 13, 2013.

It was during that time the stone fetched a jaw-dropping $83 million, the highest price ever offered for a gem at a public auction. Unfortunately, the hype was short lived as the bidder (New York based diamond cutter, Isaac Wolf) reneged his purchase shortly after. As of 2014, the stone remained as part of Sotheby’s inventory and according to the house’s annual report, the diamond is valued at $72 million (making its $60 million pre-auction estimate seem quite modest.)

The Most Valuable Colored Diamond of All Time

Weighing in at more than double the size of the Graff Pink, The Pink Star managed to shatter all previous records, fetching an astounding $71.2 million (greatly exceeding its $60 million pre-auction estimate). This price did not only grant it the title of “most expensive pink diamond in the world”, it was now the most valuable colored diamond to have ever been sold at a public auction, dethroning both the Graff Pink and Oppenheimer Blue. Today this magnificent piece is the proud possession of renowned Hong Kong Jewelry Retailer Chow Tai Fook.