Green Diamonds - Everything You Want To Know (Part 2)

In this, the second part of our two-part post dedicated to natural green diamonds, we will explore some of history's most famous stones.  If you missed the first part of this series, you can access it here, were we explore a variety of key attributes starting with how these stones get their majestic color along with how certain secondary color modifiers positively affect value 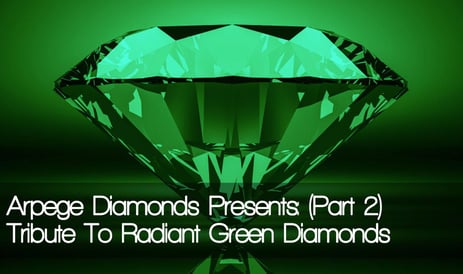 The Dresden Green is a truly magnificent 40.7 carat, pear cut, VS1 clarity, IIa grading, fancy green diamond. Even though it was cut prior to 1741, it managed to amaze GIA gemologists with the quality of its cut and finish, receiving a “very good” even by today’s rigid diamond grading standards. Another surprising characteristic of this stone is it's almost homogenous coloring throughout its body (a trait not commonly seen among natural green diamonds).

Although great speculation has surrounded the origins of the Dresden Green, it is believed to have come from the Kollur Mine in India. The diamond’s history, however, is well documented from as early as 1741, when it was purchased by the King of Poland, Augustus III, during the 1741 Great Annual Easter Fair at Leipzig.

A year later, the diamond was set as part of a badge fashioned for the Order of the Golden Fleece. In 1746, by King’s order, a new setting was created this time incorporating numerous small colorless diamonds, as well as another one of his famous diamonds, the Dresden White. 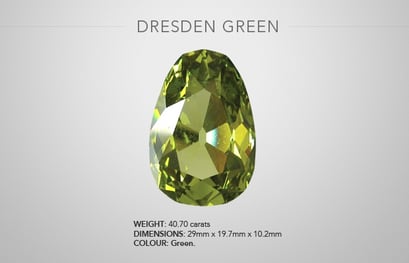 The gem along with the rest of the contents of the Green Vaults, were moved to the Konigstein Fortress for safe keeping during the Seven Year War (1756-1763). Once the war had ended, the Golden Fleece was dismantled, including the Dresden Green. This green diamond was then set as part of a hat ornament during 1768 (in which it currently resides accompanied by other colorless diamonds).

The Dresden Green was made available for the public to admire up until the start of World War II. During the years of war, the entire collection of the Green Vaults was stored in Konigstein Fortress until they were transported to Moscow in 1945 for safekeeping. The vaults’ contents were returned during 1958, and in 1959 they were put on display for the first time since 1942.

During 2000-2001, the Dresden Green was showcased alongside the Hope Blue at the Harry Winston Gallery of the Smithsonian Institution. By 2004, Dresden’s Palace was also restored along with its Green Vault, this meant that the royal jewels (along with the Dresden Green) were officially “home”, and have remained for public display up to this day.

Apart from having originated from South Africa, not much is known about the Gruosi Green diamond’s early history. Weighing an initial 100 carats, the stone was purchased by the “De Grisogono” company owner, Fawaz Gruosi during 1998. After careful examination and precise cutting and polishing, Gruosi transformed this stone into a truly magnificent 25 carat, cushion cut, nearly flawless green diamond; constituting it the second largest naturally green diamond in existence. 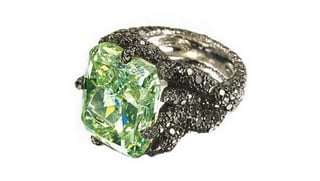 Perhaps the most notable characteristic of this diamond is its color. Just as in the case of the Dresden Green, the Gruosi Green is not a skin diamond. This essentially means that its beautiful green color is not confined to the surface of the stone; conversely it is uniformly distributed throughout its body.

Today, this diamond is set in a beautiful gold ring and is surrounded by 382 black diamonds weighing a total of 7 carats. The ring as a whole is estimated to be worth approximately $7.3 million.

Once more, not much is known about the history of this truly magnificent stone. The diamond is known to have initially been found in Central Africa and is currently owned by Cora Diamond Corporation. It is unknown when the organization purchased the diamond or for how much.

Nevertheless, the Ocean Dream is a 5.51 carat, shield cut, truly unique fancy deep blue-green diamond. When first examined by the GIA, they concluded that it was the only diamond known to naturally posses this truly unique and magnificent combination of hues. This characteristic alone places the Ocean Dream diamond among the rarest stones on the planet. 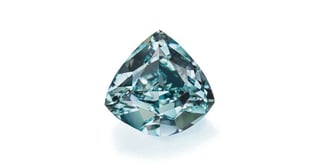 During 2003, The Ocean Dream was put on display as part of the "Splendor of Diamonds" exhibition at the Smithsonian Museum. The exhibition featured numerous famous diamonds, among which were the "Heart of Eternity", the "De Beers Millennium Star", the "Steinmetz Pink", and the "Allnatt."

Last but certainly not least on our list, the Aurora Green is a 5.03 carat, rectangular cut, VS2 clarity, natural fancy vivid green diamond. With specifications such as these the GIA has concluded that this is the largest fancy vivid green diamond in known existence. Currently, the Aurora Green sits in a beautiful designer gold ring surrounded by small, round cut beautiful pink diamonds. 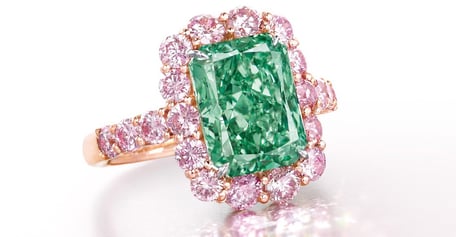 The Aurora Green Diamond was put up for sale in May of 2016 during Christie’s Magnificent Jewels Auction in Hong Kong. At the time of its sale, a green diamond had not been auctioned for an astounding 7 years. The stone was ultimately purchased by Hong Kong based jeweler, Chow Tai Fook Jewelry, for a record breaking $16.8 million (yielding a bit over $3.3 million per carat).

In recent years, fancy green diamonds have become one of the most sought after diamonds by collectors and investors. A diamond collector will acquire a green diamond for its beauty and uniqueness. An investor would acquire one for its true potential as an alternative investment. Whichever the case, there is no denying that they are one of nature’s most beautiful miracles.

We hope you found our green diamond tribute both entertaining and educational. Let us know what tribute you would like to see next! Connect with us on Facebook and Twitter, or leave a comment below!