Records are meant to be broken, right? On April 4, 2017 that’s exactly what happened. This pink diamond became the most expensive stone ever sold. 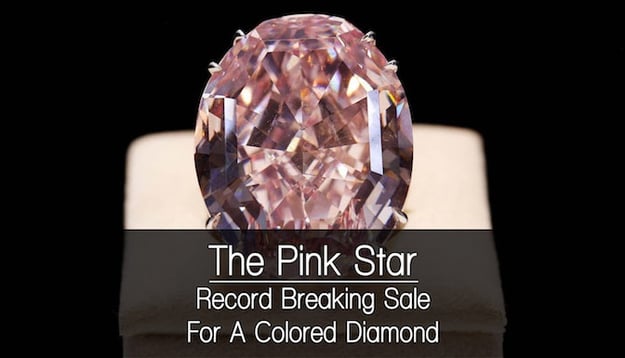 The Pink Star is a 59.6-carat diamond with GIA rating of internally flawless. On April 4th at the Sotheby’s Hong Kong auction, Jewelry company Chow Tai Fook placed a bid that processed for $71.2 million dollars. After the sale, the chairman of Chow Tai Fook renamed the stone as “CTF Pink Star” in honor of his late father.

In their statement, Sotheby’s said, “Not only was the price more than double the previous record for a fancy vivid pink diamond, but it was also a new record for any work ever sold at auction in Asia,”

The Pink Star originally weighed 132.5 carats in its rough state, but over the span of two years, the diamond was “meticulously cut and polished”; as Sotheby’s said. The diamond appeared for the first time in public in 2003. It later joined the 45.52 carat blue Hope Diamond as part of an exhibit at the Smithsonian National Museum of Natural History.

Originally, the diamond sold for $83 million at Sotheby’s auction in November 2013. However, the buyer defaulted on the payment. This time around, the Pink Star sold within just five minutes.

The diamond which previously held the record for most expensive jewel sold was the Oppenheimer Blue, selling for an incredible $57.5 million at Christie’s May 2016 Geneva auction. The previous auction record for a pink diamond was the 24.78-carat Graff Pink that sold for $46.16 million at Sotheby’s Geneva 2010 auction.

This year’s spring auction held by Sotheby’s was considered quite successful by the organization. The sales achieved a total $406.1 million, which fared quite high against their $313 million estimate.

Tad Smith, CEO and President of Sotheby’s said, “Our results of the past week in Hong Kong are equivalent to the strong sales we held a year ago and an improvement on the fall of 2016, continuing the encouraging trend we have experienced so far this year”

Two other notable non-colored diamond items were sold along with the Pink Star.

What’s your favorite colored diamond? Do you think another stone could dethrone the Pink Star as the most expensive jewel sold? Let us know in the comments below or connect with us on Facebook and Twitter!