The Oldest & Most Famous Diamonds In History

About five thousand years ago, diamonds were first mentioned in ancient writings. The first diamonds were gathered from alluvial deposits in Indian rivers and streams, and the diamond trade dates from that time. Fast forward to 1871, the first year that over one million carats of diamonds were mined. While most people associate diamonds with perfectly clear stones, colored diamonds are some of the oldest and most famous diamonds in history. 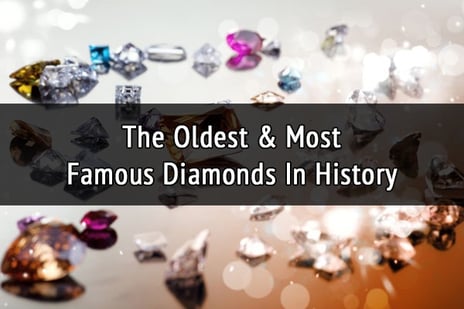 The Darya-i-Nur or the “Sea of Light” is a table cut, light pink stone, and is one of the oldest naturally colored diamonds in the world. It is also the largest pink diamond up to date, however due to gemologist being unable to safely extract it from its setting, it is speculated by the GIA to be between 175-195 carats.

Originating from India, the stone initially belonged to the Kakatiya Dynasty during the early 11th century, but was later stolen by the Khilji Dunasty to be given to the first Moghul Emperor of India. The stone would eventually be looted by the King of Persia, Nadir Shah, during his invasion of Agra and Delhi during 1739.

During King Naser al-Din’s reign, the diamond was embedded in a beautiful frame surrounded by 457 smaller diamonds and 4 rubies, and placed between a lion and the sun, both symbols of Iran’s Aryan origins. Today, the stone still sits in this exact frame and is the most celebrated diamond among all Iranian Crown Jewels.

Considered the sister stone of the Darya-i-Nur, the Nur-ul-Ain (aka The Light of the Eye) is a 60 carat, light pink, oval brilliant cut diamond. Like the Darya-i-Nur, it too was looted during the 1739 Persian invasion of India. Currently, the stone is the centerpiece of a magnificent platinum tiara accompanied by 324 pink, yellow, and colorless diamonds of varying shapes and sizes. This piece of art belonged to empress, and last Shah of Iran, Farah. 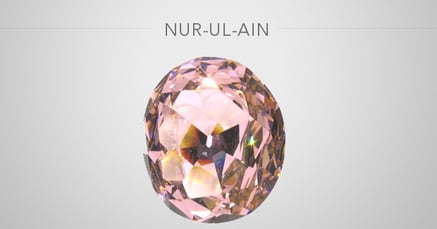 It is believed that both the Darya-i-Nur and Nur-ul-Ain had been cut from the Diamanta Grande Table, an enormous table cut, pale pink stone, weighing in at a massive 400 carats. It is said that this was first theorized by renowned 17th century French traveler and jeweler, Jean Baptiste Tavernier, who claimed to have seen the stone at the Golconda mine in South India during 1642.

Surely enough, in 1965 his theory was confirmed by a team of Canadian gemologists from the Royal Ontario Museum, during an in depth examination of the Iranian Imperial Jewels.

For more famous and historic pink diamonds click below!

Believed to have originated from India during the 15th or 16th century, this diamond got its name from the city of Florence which was ruled by the Medici Family. The 137.27 carat Light Yellow diamond poses a remarkable double rose-cut with 9 sides and 126 facets.

This beautiful diamond has been passed through a plethora of owners (both legally and illegally). While its early history is often heavily disputed, precise historic documentation begun in 1657, when Jean Baptiste Tavernier, saw the stone among the possessions of the Grand Duke of Tuscany, Ferdinando II de' Medici. The stone would then be passed into the hands of the Habsburgs through the marriage of Francis III Stephan of Lorraine, to Empress Maria Theresa of Austria, where it would be placed among the Habsburg Crown Jewels in the Hofburg in Vienna.

After the fall of the great Austrian Empire during WW I, the diamond was taken by Charles l of Austria who had been exiled to Switzerland. However, it would eventually be stolen once again and be taken overseas to South America after 1918. From there, it is said to have been brought into the US, were it was re-cut and sold during the 1920s. Unfortunately, its current whereabouts still remain unknown as no documentation of the diamond has existed since then.

The Dresden Green is a truly magnificent Fancy Green, VS1 clarity, 40.7 carat, pear cut diamond with an IIa grading. Despite being cut prior to 1741, the quality of its finish was enough to amaze GIA gemologists, receiving a “very good” even by today’s strict grading standards. Moreover, the stone’s color is almost homogenous throughout its body; a characteristic not commonly seen among greed diamonds.

Despite some speculation existing about its origins (it is believed to have come from the Kollur Mine in India) the diamond’s history is well documented from as early as 1741 when it was purchased by the King of Poland, Augustus III, during the 1741 Great Annual Easter Fair at Leipzig. By 1746, the stone had already been embedded into its second setting incorporating numerous small colorless diamonds, along with another historic stone, the Dresden White. 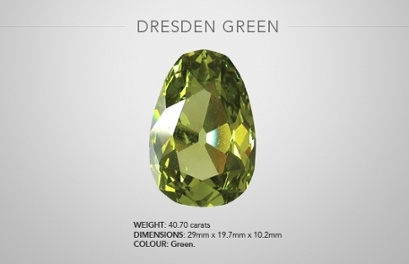 Despite its magnificence, the piece (aka the Golden Fleece) was dismantled after the Seven Year War (1756-1763). The part containing the Dresden Green would later be set as part of a hat ornament during 1768 (in which it resides up to this day) and was made available for the public to admire.

When WW II broke out, the entire collection of the Green Vaults was stored in Konigstein Fortress, and in 1945 it would be again transported to Moscow for safekeeping. The vaults’ contents would eventually be returned during 1958, and in 1959 they were put on display for the first time in 17 years.

During 2000-2001 the Dresden Green was showcased in the Harry Winston Gallery of the Smithsonian Institution alongside the Hope Blue. Finally, by 2004 restorations to Dresden’s Palace and the Green Vault were complete. This meant that the royal jewels (along with the Dresden Green) were going back to their rightful place, where they have remained for public display ever since.

For more famous and historic green diamond click below

This 45.54 carat, cushion cut, Type llb, Fancy Dark Grayish Blue diamond is said to have originated from the Kollur mine in Golconda, India and was initially bought by Tavernier in the mid 1600s as a triangular, 112 carat rough.

In 1673 the diamond was sold to King Louis XIV and was re-cut to 67 carats in order to be worn in ceremonial occasions (and was later gifted to Marie Antoinette). However, the stone would ultimately be stolen during 1792, amidst the upheavals of the French Revolution.

It eventually resurfaced during 1812 as a 44.25 carat stone; now in the hands of London diamond merchant Daniel Eliason. In 1839 the gem was sold to Henry Philip Hope, and continued to change ownership after his death until it ended up in the hands of Pierre Cartier in 1910. It was during this time that the stone was reset in a three-tiered circlet of colorless diamonds in order to tempt Washington D.C. socialite and mining heiress, Evelyn Walsh McLean. The diamond was again reset as a pendant on a necklace of white diamonds and remained in the possession of Mrs. McLean until her death in 1947.

The diamond was eventually purchased by famous jeweler, Harry Winston who ultimately donated it to the Smithsonian Institution in Washington, DC, where it has been one of the star attractions in the hall of minerals.

Believed to be the sister stone of the Hope Diamond, the Wittelsbach-Graff is an Internally Flawless, 31.06 carat, Fancy Deep Blue masterpiece.

After being owned by a plethora of members of European royalty, the stone was ultimately incorporated into the Bavarian crown jewels during 1722, where it would remain for over a century. After Bavaria became a republic, the crown jewels were dispersed and the diamond fell off the radar only to resurface during the early 1960s.

Joseph Komkommer was given the task of evaluating and recutting the stone, however after recognizing its identity he refused to work on it as it would compromise the diamond’s history and value. The stone would disappear from the public yet again, eventually reappear in an auction during 2008 where it would be bought by Laurence Graff for a record breaking $23.4 million.

4.52 carats would ultimately be trimmed off, revealing its true brilliance and clarity. After reevaluation by the GIA the diamond would be given an IF “Fancy Deep Blue” grading (updating its profile from “fancy grayish-blue”), and without a doubt significantly impacting the value of this historic stone.

You can check out our whole blue diamond tribute below

Are there any historic diamonds we missed? Do you know of a colored diamond predating the ones on our list? Let us know, and as always feel free to follow us on LinkedIn and Twitter.