The Arpège Tribute to the Brilliant Yellow Diamonds Pt.2

The second part of our Tribute to the Brilliant Yellow Diamonds is dedicated to the history and characteristics of our favorite yellow diamonds. In no particular order, here are 6 breathtaking yellow diamonds that left their mark in history.

If you haven't checked out part one to our tribute, you can click here.

As a rough originating from South Africa, this magnificent stone weighed a remarkable 218 carats. Owned by famous jeweler and collector Laurence Graff, the rarity and value of this rough diamond called for the most experienced and skillful craftsmen to unveil its true beauty. The responsibility of cutting this magnificent stone went to master cutter, Jean Chandesais who estimated that it would take an astounding 16 weeks for the rough to be polished. Finally, on December 12th, 2000, this breathtaking 132.43 carat, Very Good polish, Very Good symmetry, VS1, Natural Fancy Vivid Yellow was granted its coveted certificate by the GIA, and was deemed the largest natural color Fancy Vivid Yellow Diamond to ever have been graded by them. 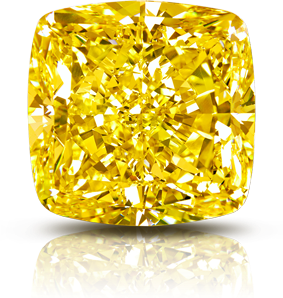 Known throughout history as the Austrian Yellow, Tuscany Diamond, or Grand Duke of Tuscany; this 137.27 carat Light Yellow diamond is a remarkable double rose-cut with 9 sides and 126 facets. It is believed that this stone had originated from India during the 15th or 16th century, and got its name from the city of Florence which was ruled by the Medici Family.

This beautiful diamond has been passed through a plethora of owners (both legally and illegally). Its early history is somewhat disputed however, with some believing it to have been acquired by the Medici Family after the diamond’s rough had been acquired from the King of Southern India, Vijayanagar by Portuguese Governor of Goa, Ludovico Castro. Others believe that the rough was bought, cut, and worn by the Duke of Burgundy, Charles the Bold, who is said to have lost it during battle, only to be found by a lowly foot soldier. 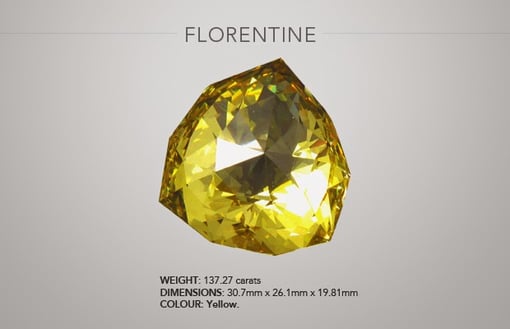 Its documented history begins in 1657, when Jean Baptiste Tavernier, the famous French jeweler and traveler, saw the stone among the possessions of Ferdinando II de' Medici, Grand Duke of Tuscany. It was then passed into the hands of the Habsburgs when the line of Medicis ended through the marriage of Francis III Stephan of Lorraine to Empress Maria Theresa of Austria. The stone would then be placed among the Habsburg Crown Jewels in the Hofburg in Vienna. During that the time, the diamond was valued at $750,000.

After the great Austrian Empire fell during the first World War, the diamond was taken by Charles I of Austria who had been exiled to Switzerland. The stone would eventually be stolen by a member close to the Imperial family, and was taken to South America some time after 1918. Finally, rumors say that it was brought into the US, where it was re-cut and sold during the 1920s. No documentation of the stones exists since then, and its current whereabouts are still unknown.

Unlike most stones, the origin of The Incomparable was a bit unorthodox. The diamond was actually found in the 1980s by a young girl playing in a pile of rubble outside her uncle’s house in Mbuji Mayi, Democratic Republic of Congo. This rubble was collected legitimately from old mine dumps in the nearby MIBA Diamond Mine, considered too bulky to be worth scanning for roughs. The massive 890 carat rough was eventually sold to De Beers and was then purchased by the Donald Zale (Zale Corporation), in partnership with Marvin Samuels (Premier Gems Corporation), and Louis Glick, both prominent figures in the New York diamond industry. 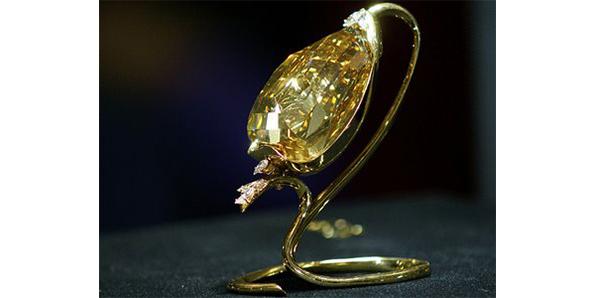 Despite being in the hands of the famous diamond cutter Mr. Samuels, this stone showed a fair share of problems while being processed, thusly four years were spent studying and then carefully cutting the rough. The largest piece cut from the stone was the Incomparable, a 407.48 carat, shield-like step cut, Fancy Brownish-Yellow, Internally Flawless masterpiece. Its unusual triangular shape gave birth to a new term by Marvin Samuels, the "triolette."

The Incomparable was unveiled on Zale Corporation's 75th anniversary during November of 1984, and was put on display at the Smithsonian Institute in Washington DC shortly after. Despite being the largest diamond to have been ever been offered for sale (at the time), the stone was withdrawn from auction twice, once in 1988 and again in 2002 for not reaching its $20 million reserve price. It is said that the diamond is still owned by Louis Glick up to this day.

Despite it being relatively new, the Sun Drop has already earned the right to rank among the world’s greatest colored diamonds due to its color and size. Unearthed in South Africa during 2010, the stone was eventually acquired by Cora International which, after 6 months of intensive work, managed to transform it into a breathtaking 110.03 carat, pear cut, VVS1, Fancy Vivid Yellow diamond. The diamond was put on display in the Natural History Museum of London on February, 2011, where it stayed for 6 months for all to admire. In November of that year, the diamond was put up for auction at Sotheby’s Geneva Auction where it sold for an incredible $12.36 million, setting a record price for a yellow diamond sold at a public auction.

While its current owner and location remain unknown, its sear size and captivating rich color will without a doubt make it leave its mark and become a great part of history as it accumulates stories of ownership and value.

Originally a 287.42 carat rough (and one of the largest fancy yellow diamonds ever to be discovered), this diamond is believed to have been found during 1877 in one of the Compagnie française de Diamant du Cap mines of South Africa. It eventually was sent to Paris where it was cut under the supervision of the gemologist George F. Kunz resulting in a 128.51-carat, 90 faceted, cushion cut masterpiece.

In 1879, the diamond was bought and shipped to the United States by Gideon Reed for his employer, Tiffany. Almost 90 years later, the stone was set into Tiffany’s iconic “Bird on the Rock” brooch, where it remains to this day.

The Tiffany diamond has only ever been worn by two women for two very special occasions, Mrs. Sheldon Whitehouse during the 1957 Tiffany Ball, and the legendary Audrey Hepburn while posing for the publicity photographs for her movie “Breakfast at Tiffany’s” during 1961.

The Allnatt Diamond is truly a piece of art. This magnificent 101.29 carat, cushion cut, Fancy Vivid Yellow diamond was given a VS2 clarity grading by the GIA. This bears great significance as it is extremely rare for greater carat stones to have such a high clarity grading. While the origins of the diamond are still unknown, it is believed to have been unearthed in the De Beers Premier Mine in South Africa. This speculations is based on its similarities with other diamonds found in that region.

The Allnatt diamond was bought by Hong Kong based corporation, SIBA, during Christie’s 1996 Geneva Auction for a little over $3 million. Since then, the diamond has been showcased in the Natural History Museum of the Smithsonian Institution in Washington, DC. on two very important occasions. In 2003, it was displayed as part of the “Splendor of Diamonds” exhibition alongside other famous colored diamonds such as the Moussaieff Red. In 2005, it was featured as part of the “Diamonds” exhibition, which highlighted eight of the world’s most legendary diamonds of all time.

We hope our tribute helped you understand the true value of these underrated stones, and show you that they are truly special.