The Incredible 910 Carat Gem from Lesotho

Just last month one of the largest diamonds in history was discovered in the kingdom of Lesotho in southern Africa. Weighing in at 910 carats (or approximately the size of 2 gold balls), this giant rough was unearthed in the Letseng mine, by the renown Gem Diamonds Ltd. 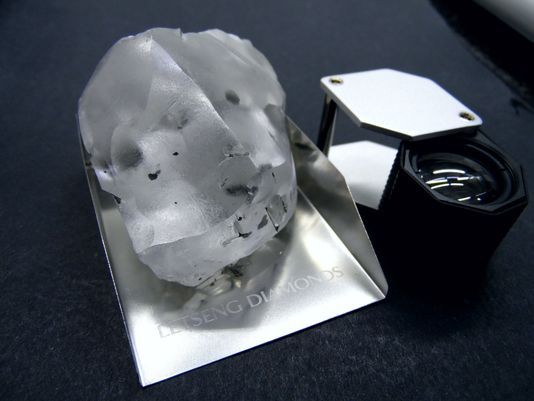 Why is it important?

Over the years the Letseng mine has become famous for the size and remarkable quality of stones it produces (such as the Lesotho Promise), and this stone is no exception.

Its color: The diamond holds a D Color grade, the highest grade possible for a colorless stone. This means that there is a complete absence of hue, and that the diamond can be considered “pure”

Its type: The rough was graded as being a Type IIa which means that there are little to no nitrogen inclusions, further supporting its “purity” and crystal clear features

From the above it is safe to assume that the stone will not be cut into multiple, smaller pieces. Diamonds of this caliber are usually processed in a way to preserve as much size as possible, making them even more irresistible in the eyes of investors.

The Letseng mine is famous for the size and quality of the diamonds it produces and has the highest average selling price in the world. Gem sold a 357-carat stone for $19.3 million in 2015 and in 2006 found the 603-carat Lesotho Promise.

Currently Gem Diamonds has not disclosed the estimated value of the rough nor have they revealed how they intend to market or sell the stone, however from its quality and size, and assuming there are no large inclusions found in the gem while processing it, we can estimate that the diamond will be valued at around $40 million. An estimation further supported by Ben Davis, an analyst at Liberum Capital Markets.

Ultimately, its final value will be determined by the size and quality of the finished product(s). Just like when Lucara Diamond Corp. sold  the Lesendi La Rona, a 1,109-carat diamond for $53 million last year, but got a record $63 million for a significantly smaller 813 carat stone it had found during 2015.

We said that this rough is currently the 5th largest stone ever to be discovered, so which were the 4 diamonds that exceed it in carat size?

What do you think the future hold for this impressive rough? Will it be transformed to a massive impressive diamond to sell for tens of millions, or will it be cut into multiple breathtaking stars that will be embedded in fine pieces of jewelry? Let us know! And as always feel free to follow us on Facebook and Twitter.

For more interesting facts from the diamond world, check out the articles below: