Two Of The World's Most Famous Colorless Diamonds

It's no secret that we here at Arpège Diamonds adore fancy colored stones, but colorless diamonds have always held a special place in our hearts as well. With the Lesedi La Rona (link when posted) yielding massive price tags in auction recently we felt the urge to bring you two more famous (and frankly mammoth) colorless stones. 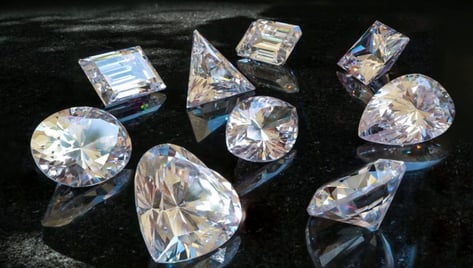 Nearly 99% of all diamonds found are colorless. The Gemological Institute of America grades these diamonds on their hue from a scale of D to Z, with a grade D diamond being the purest of the colorless stones. Although colorless diamonds aren’t hard to find, discovering a diamond the size of the Cullinan and the Centenary Diamond happen only once in a blue moon.

The Discovery of a Titan

On January 26, 1905, the owner of the Premier Diamond Mines in South Africa, Sir Thomas Cullinan, was present during the discovery of the largest rough diamond in the world. His superintendent, Frederick Wells, was routinely inspecting the mine when a shiny object caught the corner of his eye as the sun slowly set.

After a quick extraction, the Cullinan diamond was found. This mammoth diamond weighed 3,106 carats, and the cutters at I. J. Asscher & Co. split the diamond into 9 large pieces and 100 smaller pieces, each cut and polished into different shapes and sizes.

This diamond was so large and tough that when Mr. Asscher went for the initial cut with a steel cleaver blade, the blade broke and the diamond was undamaged!

The diamond was presented to King Edward VII on November 9th, 1907 by the Transvaal government, also known as the South African Republic. The King then asked the trustworthy Mr. Asscher to handle the cutting. Each of the nine large pieces are now either part of the British Crown Jewels or in the control of the Royal Family.

This cushion-cut stone weighs an enormous 317.4 carats. The remaining pieces weigh less than 100 carats each, and in its whole, the Cullinan diamond is worth over $2 billion.

The De Beers Group is one of the leading diamond exploration and mining businesses worldwide. In their possession is the Centenary Diamond, worth an estimated $100 million dollars.

The modified heart-shaped brilliant cut diamond weighs 273.85 carats, originally weighing 599 carats in the rough in the year 1986. This is the third largest diamond out of the Premier Mines, with a grade D clarity and rated internally and externally flawless.

Since the value of the diamond is extremely high, the cutting of the diamond had to be in the perfect environment. De Beers employed a security detail, built an advanced underground room with minimal mechanical vibrations and temperature variation, and hired one of the world’s most renowned diamond cutters, Gabriel Tolkowsky.

This diamond to current date is valued at over $90 million.

For more reading on famous colored diamonds throughout history, check out the link below: