In July, the colored diamond market once again demonstrated how well it performs during periods of economic uncertainty!

The month held two large auctions by Christie’s and Sotheby’s respectively, and not only did the results greatly exceed expectations, it provided a resoundingly bullish statement about the future of the diamond industry, especially during a period of unprecedented turmoil.

These prices were realized during a global pandemic that saw operations come to a halt, mining performance being impacted, along with shipment and processing of diamonds being delayed.

Interestingly, while colored diamonds tend to do well during such periods of uncertainty, Christie’s themselves tried to manage and even reduce expectations during their pre-auction announcements.

After months of uncertainty, stress, and speculation, the first Magnificent Jewels auctions for 2020 highlighted the strength of colored diamonds!  Not only were the auction results very respectable, there was also a new record broken for blue diamond price per carat.

But why is this significant? In times of economic uncertainty, investors turn to tangible assets like art, vintage collectibles, precious metals, and of course diamonds to protect their wealth. This auction alone helped cement that statement and restore confidence in the diamond market’s health, showcasing that Fancy Color Diamonds are still taking center stage in public auctions, and still breaking records.

The Star Of The Show

The star of the auction was a beautiful 12.11 carat, Internally Flawless (IF), Fancy Intense Blue diamond that greatly surpassed its pre-auction high estimate of $12.3 million. This magnificent diamond fetched a massive $15.9 million, translating to a little over $1.3 million per carat, and set a new world record for highest price per carat paid for a Fancy Intense Blue diamond over 10 carats. 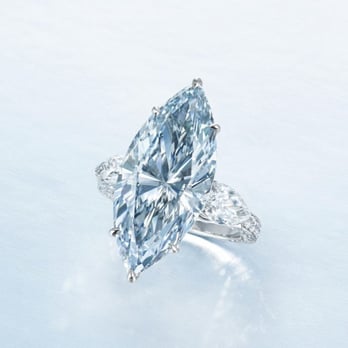 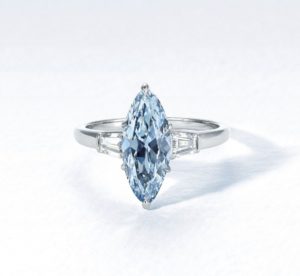 It wouldn’t be an Arpege article if we didn’t mention pink diamonds would it?

Christie’s July, 2020 Hong Kong auction also presented a 2.01 carat, VS1 clarity, Fancy Pink diamond that sold for $178,571 (or $$88.0 thousand per carat), drastically exceeding its pre-auction high estimate. But something is odd, a diamond of this caliber should be significantly over $178 thousand, why was it so “cheap”? This particular diamond had a high depth percentage, meaning there was a lot of excess weight, contributing nothing to color saturation, or clarity. In essence, it is a carat weight that has no benefit, and thus adds no value, while still bumping the total carat count to 2.01. If the weight depth was at a lower percentage then the weight would be under 2 carats, and thus the price per carat drops. 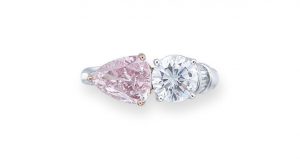 Finally, Christies also presented us with an 8.04 carat, Internally Flawless (IF), oval cut, Fancy Brownish Orangy Pink diamond that sold for $608 thousand. This blew past its pre-auction, high estimate of $380 thousand out of the park. If you recall from our color modifiers and color undertones articles, the Brownish color in its hue causes a discount to the diamond’s overall price. It's plausible that the diamond’s current owner might make an attempt to remove the brownish hue completely, and transform it to an Orangy Pink diamond, potentially increasing its value. 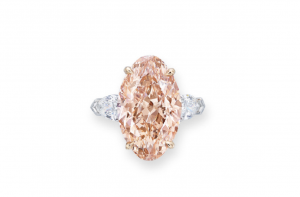 A day after Christie’s, Sotheby’s held their Hong Kong Magnificent Jewels auction. With 204 items being sold, Sotheby’s grossed $56.8 million, making 2020 the most successful year in Hong Kong since 2017.

Blue and Pink diamonds were once again the stars, and despite not setting any new records, there were 2 pieces in particular that grabbed our attention. 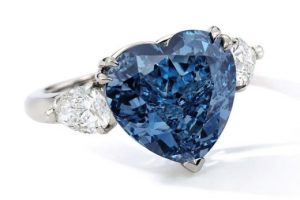 The second highest price was fetched by another heart shaped diamond. Particularly, a 4.49 carat, heart cut, Internally Flawless (IF), Fancy Vivid Pink diamond, selling for $8.18 million (or $1.82 million per carat), which was right under its pre-auction high estimate of $8.83 million. 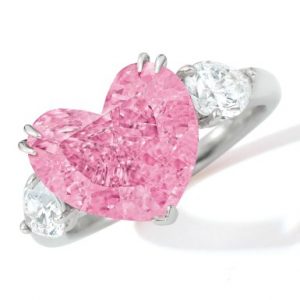 So after months of uncertainty, stress, and speculation, the first Magnificent Jewels auctions for 2020 were a much needed breath of fresh air, and with very encouraging results for the future of the diamond market.