The Most Valuable Naturally Colored Diamonds of 2016

A year ago in our article “Record-Setting Colored Diamond Sales in 2015” we had predicted that it would be very hard (impossible even), for future auctions and tenders to surpass the ones we experienced in 2015. It is a great pleasure to announce that we were wrong.

2016 was an incredible year with a wide array of record breaking diamonds of all colors, shapes, and sizes. Below are the most notable mentions. 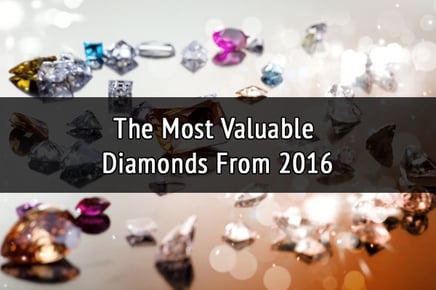 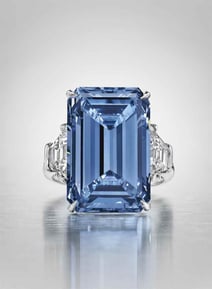 The title of most valuable colored diamond on this list undoubtedly belongs to the Oppenheimer Blue. Deemed the “gem of gems”, this 14.62 carat, rectangular cut, Fancy Vivid Blue diamond was sold for $57.7 million (yielding approximately $4 million per carat) during Christie’s Geneva auction in May, 2016. This did not only set a global auction record for blue diamonds, it also made the Oppenheimer Blue the most expensive diamond ever sold at an auction or tender.

The third diamond on our list of blues is a 7.32 carat Internally Flawless (IF grading) Fancy Vivid Blue. The stone was sold for $17.1 million (meaning a little over $2.3 million per carat) during Sotheby’s Geneva Magnificent Jewels and Noble Jewels auction in November, 2016.

The Sky Blue Diamond, also made an impressive appearance in Sotheby’s Geneva auction in November. The 8.01 carat Fancy Vivid Blue diamond was shown mounted on a beautiful Cartier diamond ring and was sold for a little over $17 million.

Finally, a list without the magnificent Cullinan Dream would not be complete. Weighing 24.18 carats, it is the largest Fancy Intense Blue ever to be sold at auction. This truly magnificent mixed cut gem was sold for approximately $25.3 million during Christie’s New York Magnificent Jewels auction in May.

Pinks seemed to be overshadowed by blues in last year’s auctions and tenders, losing the dominant position they held during 2015. This however, definitely does not mean that they are any less desired or valuable. Three fancy pink diamonds in particular stood out during 2016 auctions. 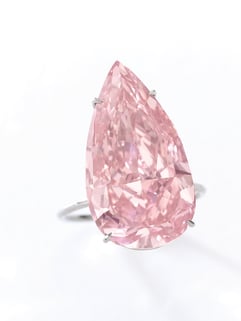 First on our list of pinks is the Unique Pink, a 15.38 carat, pear cut Fancy Vivid Pink diamond. The stone was sold during Sotheby’s May Geneva Magnificent Jewels and Noble Jewels auction  breaking the record for price paid for a Fancy Vivid Pink diamond, fetching an astounding $31.5 million, or a bit more than $2 million per carat.

A 9.14 carat Fancy Vivid Pink pear cut diamond named the “Light of Memory” comes in second on our list. This breathtaking stone sold for $18.2 million during Christie’s Geneva Magnificent Jewels auction in November, yielding close to $2 million per carat.

The final gem on this list is a 17.07 carat, step cut, Fancy Intense Pink diamond that sold for $20.7 million during Sotheby’s Geneva auction in November of 2016.

It may surprise you that a green diamond is on the list since such diamonds rarely make a significant presence in auctions; the Fancy Vivid Aurora Green Diamond however is a notable exception. The 5.03 carat, rectangular cut, VS2 clarity stone was set in a magnificent ring surrounded by small round cut pink diamonds and was sold for a little over $16.8 million during Christie’s Hong Kong Magnificent Jewels sale in May. While it may seem to underperform when compared to the blues and pinks mentioned above, this magnificent and striking gem managed to break the record price paid for a green diamond by millions. 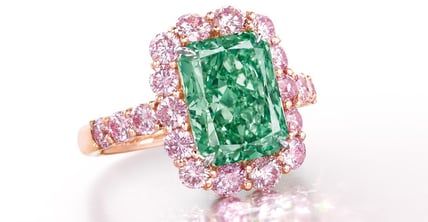 Despite naturally colored diamonds dominating auctions and tenders during 2016, white diamonds also had a noteworthy presence, especially in the case of Miroir de l’Amour (or Mirror of Love). Boehmer et Bassenge’s beautiful earrings hold a pair of D color, pear cut, flawless IIa diamonds weighing 50.47 and 52.55 carats. They are undoubtedly the world’s largest perfect pear cut stones ever to be sold at an auction and rightfully fetched a price close to $17.7 million during Christie’s Geneva auction in November. 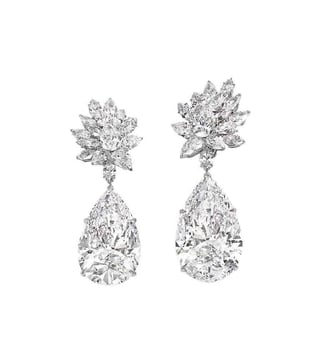 It is evident that 2016 was an outstanding year for fancy colored diamonds and due to their immense rarity and heightened demand. While the diamonds on our list were among the most valuable, it goes without saying that a plethora of other diamonds went on to break records in smaller carat categories.

Once again we believe that it will be hard to top such incredible, record breaking pieces; but deep down we hope that 2017 proves us wrong one more time.