Could The Raj Pink Be A Threat To Current Pink Diamond Record Holders?

2017 has been an exceptional year for record setting diamonds, and when we got news of the Raj Pink, it only got better. Once again Sotheby’s has managed to amaze us as it unveiled the Raj Pink Diamond on October 13, in London. This stone is said to be the largest Fancy Intense Pink diamond in the world, and was the "piece de resistance" in the November 15, Magnificent Jewels and Noble Jewels sale in Geneva. 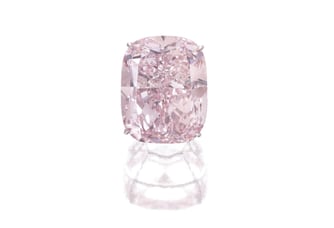 About The Raj Pink

Not much can be said about this stone’s early history. What we know is that the diamond was discovered in 2015 and is named by its owner (who wished to remain anonymous.)

Although we don’t know the name of the person responsible for processing this stone, we know that it was in very reliable and experienced hands. The master cutter carefully studied it for more than a year after its discovery in order to bring out the stone’s true beauty, ultimately transforming it into a cushion-modified brilliant cut, 37.3 carat, Fancy Intense Pink masterpiece.

Why Is It important?

It is a known fact that pink diamonds are among the rarest in the world, but to witness a stone of such size and color saturation within the pink color category is an extraordinarily rare and breathtaking phenomenon.

In a statement, David Bennet, worldwide chairman of Sotheby's International Jewellery Division said: "The discovery of any pink diamond is exceptional, but The Raj Pink's remarkable size and intensity of color places it in the rarefied company of the most important pink diamonds known."

Even the GIA, which has certified thousands of Fancy Colored Diamonds was left dumbfounded, exclaiming that “for a diamond to display strong, unmodified pink color like that observed in 'The Raj Pink' is rare, particularly at so considerable a weight”. The gemologists also went on to characterize the stone as “astonishing” and it hue as “a very bright and ravishing fancy intense pink color”.

While it is surprising to see such a renowned institution to use such characterizations, there is good reason behind their reaction. The discovery of a gem-quality pink diamond of any size is an extremely rare occurrence, and of all the stones that are submitted to the GIA each year, less than 0.02% are predominantly pink.

Did It Manage To Dethrone Our Current Record Holders?

As we all know, the current title holder for most expensive pink diamond and most valuable colored stone of all time belongs to the Pink Star. This Fancy Vivid Pink, weighed in at 59.60 carats, and shattered all records with its $71.2 million price tag in April.

Before the Pink Star rose to glory, the record holder for most valuable pink stone was the Graff Pink. The truly beautiful Fancy Intense Pink, 24.78 carat diamond yielded $46.1 million at Sotheby’s 2010 Geneva Sale, holding its title for a remarkable 7 years.

So did it manage to break records and dethrone any of the pinks mentioned above? Unfortunately, no.

While the Raj was estimated to reach (and potentially surpass) the $30 million mark, it fell short of its asking price with bidding grinding to a halt at little over $14 million.

Big Hopes For The Future…

Other than its mesmerizing appearance and sheer size, there is not much to say about this magnificent stone…yet. Despite being only 2 years old, the future of this diamond seems very bright, and it will without a doubt leave its mark in history as one of the most important pink diamonds to have ever been discovered.

For more reading on other famous colored diamonds, see the links below: