We often see auctions being dominated by blue and pink diamonds, but what about naturally colored purple diamonds? Despite being in high demand we almost never see these precious stones make headlines, and for good reason…they are rare!

Fancy purple diamonds account for only 0.2% of all colored diamonds unearthed, and those presented at auctions rarely surpass 3 carats. When these gems do show up however, they never fail to amaze. This was precisely the case for the absolutely stunning Purple Orchid diamond. 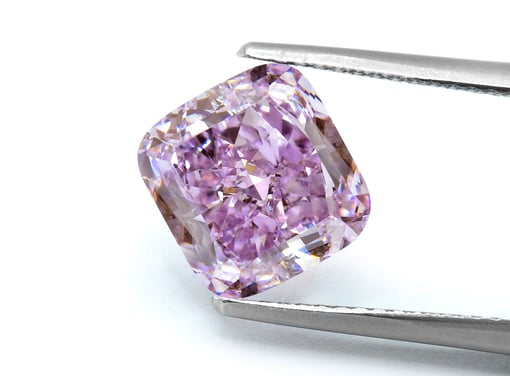 Purple diamonds, are held to very high standards as their hue represents wealth, royalty, and power; it is no coincidence that these diamonds are so exclusive.

Colored diamonds are found throughout the world. More specifically, these gems are typically discovered in Russian, Brazilian, Australian, and South African mines, but at very low volume.

Because these gems are so hard to find, they have generated a great amount of interest among investors and collectors, driving a drastic increase in price.

The journey of these precious stones is often one of a nomadic form, from the moment they are discovered until the moment the diamond reaches the hands of the fortunate owner. No different is the story of the Purple Orchid.

This stone was unearthed in a mine in South Africa (whose name was never disclosed) during early 2014. From there, its original owners traveled to multiple diamond trading hubs in order to generate interest from appropriate buying parties. The 4 carat rough eventually made its way to India, where it was purchased by Shmulik Polnauer for Leibish after a 4 day negotiation process.

Upon purchase, the rough underwent 4 months of intensive studying, cutting, and polishing in order to bring out its true potential. The result, a truly breathtaking 3.37 carat, cushion cut, Fancy Intense Pinkish Purple stone with a VS2 clarity rating. Purple diamonds of this color, intensity and weight, are considered a true rarity of nature.

The Purple Orchid made its first public appearance during September 2014, where it was showcased and scheduled for auction at Hong Kong’s Jewelry and Gem Affair. The asking price for the diamond was set at $4 million, approximately $1.2 million per carat.

Unfortunately, as is common in high valued auction, both the final selling price and winning bidder were never disclosed.

Not much was heard of the stone since then but it is safe to assume that if it ever appears at a public auction in the future, it will take the world by storm one more time. We don’t know about you but, despite not being the largest purple diamond in the world, in our eyes the Purple Orchid is by far one of the most beautiful.

Also for more colored diamond insight be sure to check out the links below: