It's March, which means it's the month we celebrate both March Madness and everything green.

So, what better way to celebrate that then to share insight around one of the most famous green basketball ball cards in history, and green diamonds. 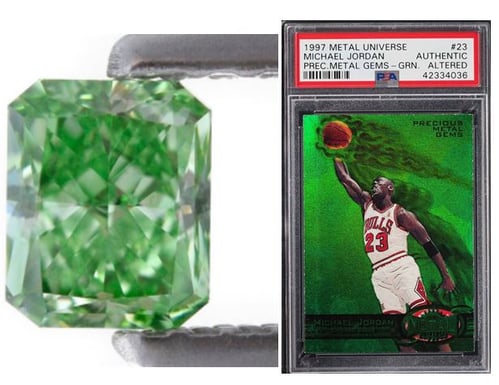 What are these commonalities?

There are quite a few actually. They are both extremely rare, and can reach extremely high value in the right circumstances. But they have something else, a far more “physical” similarity.

The Unique Nature of "Foil" Cards

For many of you, you may have experienced the sensation of holding a piece of cardboard highlighting your favorite sports icon. Think about the rush you felt effectively holding nothing more than a cardboard photo of your favorite athlete in your hand.   Actually, cardboard cards were the norm for roughly 100 years stretching from the late 19th century and Tobacco cards through the early 1990's.  As printing technology became more sophisticated, so did the process of creating cards.

Fast forward to 1997.  A relatively new type of card, called the "Foil" card was introduced, not on a mass scale but on a very tiny scale.  If you have ever held a foil card, you could immediately tell that there was something special about them. Their shiny, and “metallic” appearance made them stand out, making you feel that you’ve found something truly special.

…And foil cards were special. Foil cards were extremely hard to find. Only a handful of such cards were made for the early sets, and the Precious Metal Gems Green (PMG) Michael Jordan card, released for the 1997-98, basketball season, was no exception. Only 10 such cards were ever produced of this all-time great!

While these cards had a unique beauty and scarcity, these cards were unfortunately prone to damages around the edges.

Even if you used the protective measures, pealing and smudges on the coating might still occur. They are that fragile. 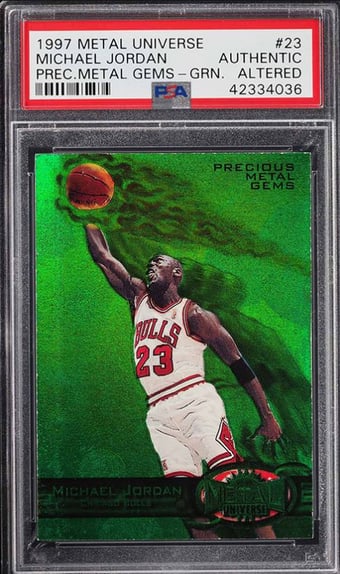 Here's where our story takes an interesting turn. As with naturally colored diamonds, scarce collectibles can become legendary.

The PMG Jordan may have an announced population of 10 cards, but like the iconic stones, if you don't find them (and they were only distributed in packs), they become something that both passion collectors and treasure hunters alike, actively seek out... and that causes a very unique demand.

Given the condition sensitive nature of these foil cards and the fact that only 10 were ever made (although not all 10 have been found), how much could this "green beauty" sell for in the market?

No.  Just the opposite.  That number is significantly too low.  The above card, graded - albeit it not in perfect condition - sold for a remarkable $351,000!  This represents the 3rd most expensive basketball card ever sold!  This incredible value lay in the green foil as there are thousands of Michael Jordan cards but no more than 10 of this green one.

Even without a numeric grading, the rarity of this card alone makes it a “once in a lifetime find.” as Brent Huigens, CEO of PWCC Marketplace, told the Chicago Tribune.  He went on to say, "we call it a ‘holy grail’ because it’s so scarce and so desired that you just frankly never see it…” and he would be correct.

How Does This Tie to Green Diamonds?

Like the Michael Jordan card, green diamonds are exceptionally rare.  Out of all diamonds mined, only 0.0001% are colored, and only a fraction of those are green.

In addition, these diamonds share a much more physical connection with the foil card, and that is how their value is defined by their outer layer. 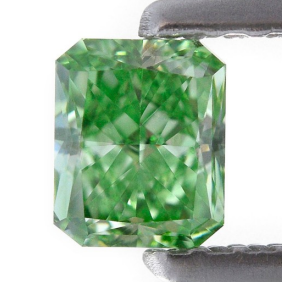 It should be noted that only the portions of the diamond that came into direct contact will illustrate a green hue. This results in stones with different shading or completely uneven coloration. This further contributes to their rarity as a diamond with a completely uniform hue, as it is extremely hard to find.

The color intensity and uniformity of these beautiful diamonds is determined by three main factors:

The most commonly found green diamonds are "skin stones." This essentially means that only the surface of the diamond contains a green hue as result of exposure to weaker levels of radiation (Alpha.) Often, such stones lose the intensity of their hue as they are cut and polished, and sometimes they may even lose their color completely.

On the other hand, stronger levels of radiation (such as Beta and Gamma) tend to permeate deeper into the stone’s body, resulting in green diamonds with a much richer color and uniformity. These are the types of green diamonds that are sought after by investors. It should be noted that due to their lack of supply and extreme rarity (Beta and Gamma irradiated stones constitute only 0.1% of all green diamonds found), the value of such diamonds could be astronomical rivaling that of the great reds, blues, and pinks.

The Most Expensive Green Diamond 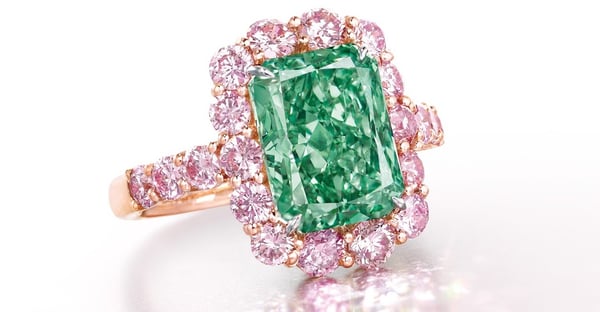 The Aurora Green diamond is a 5.03-carat natural green diamond, making it the world’s largest fancy vivid green diamond ever to be graded by the Gemological Institute of America. The diamond is exceptional for a variety of reasons including its color, larger than usual size, and VS2 clarity. However, its lack of fluorescence, an uncommon feature of this diamond type, is what truly makes this stone one of a kind.

This magnificent stone sold for $16.8 million, which is more than $3.3 million per carat, during Christie’s Magnificent Jewels Hong Kong auction, in May, 2016.

It's fascinating to see how two very different alternative investments, from completely different niches have so much in common...

For more interesting facts about colored diamonds and investing insight be sure to check out the articles below: