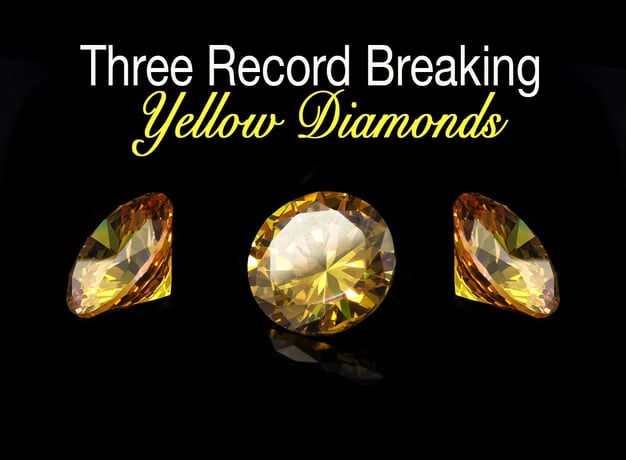 The Tiffany Yellow is known as one of the world’s largest diamonds ever discovered. However, many conflicting stories have been passed along through the years about its true origin. It is believed that this 287.42-carat gem originated from the Kimberley Mine in South Africa between 1877 and 1878 and was possibly owned by the De Beers Mines, a French company.

In 1879 the diamond was purchased for $18,000 by the Tiffany & Co. branch in Paris, where the cutting and polishing was lead by gemologist George F. Kunz. After one year, the finished result by the distinguished gemologist was a 128.54-carat cushion-cut brilliant gem with a total of 82 facets revealing its stunning brilliance and captivating color. The Tiffany Yellow is now a prime example of the “Canary Yellow” hue.

Over the years, the diamond has been displayed at Tiffany & Co. stores as well as several exhibitions worldwide, including the Smithsonian National Museum of Natural History, The Chicago Columbian, The Pan-American and The New York World’s. The exquisite stone has only been worn on two occasions. One at the 1957 Tiffany Ball by Sheldon Whitehouse and in 1961 by Aubrey Hepburn for a photograph promoting the famous movie Breakfast at Tiffany’s. The stone was set on a brooch named “Bird on the Rock” which was also designed by one of Tiffany’s & Co. jewelers.

In 1972, the unmounted Tiffany Yellow diamond was advertised for sale in the New York Times for $5 million during a flash sale that lasted only 24 hours and resulted in no buyer. Since then, the diamond remains on display permanently on the main floor of Tiffany’s & Co. Fifth Avenue store in New York.

The Allnatt Diamond is a breathtaking fancy vivid yellow diamond that weighs 101.29 carats and was graded a VS2 clarity by the GIA. It is extremely rare for diamonds of larger size to have such a high clarity grading, making the Allnatt Diamond distinctive from its counterparts. The true origin of this stone is unknown however, it is believed to have been unearthed in the De Beers Premier Mine in South Africa due to its similarities with other diamonds from that area.

In 1996, the Allnatt diamond was sold to the SIBA Corporation of Hong Kong by Christie’s of Geneva where it fetched an astronomical hammer price of $3 million. The mesmerizing Allnatt Diamond has been showcased during two occasions at the Natural History Museum of the Smithsonian Institution in Washington, DC. In 2003, it was displayed as part of the “Splendor of Diamonds” exhibition along side other famous colored diamonds including the Moussaieff Red. Again, in 2005 the Allnatt was featured as part of the “Diamonds” exhibition, which highlighted eight of the world’s most legendary diamonds of all time.

Upon discovery, The Golden Empress weighed in at 299 carats in its rough. The gigantic diamond was cut by the master craftsmen at Graff Diamonds, who has previously cut some of the most famous stones in the world. After being cut, the Empress also acquired a group of what are referred to as “ladies-in-waiting” stones. Six pear cut and two brilliant cut stones were carved from the huge rough, the largest of them a marquise cut weighing in at 21.34 carats. Not to be outdone, the cushion-cut Golden Empress set the bar with a finished weight of 132.55 carats, and a color rated as a Fancy Intense Yellow. As rare as diamonds are, one in ten thousand makes the Fancy Intense grade. The Empress has been set in a necklace of 31 other Fancy Intense yellow diamonds, because when it comes to diamonds of this quality, there is no such idea as too much of a good thing.