The first half of 2016 saw a whirlwind of colored diamonds make their way to the auction block. This recent trend has caught the eye of investors and collectors alike, both as showpieces and investment opportunities. To this point, various auction houses have held sales featuring an impressive range of colored diamonds, the highlight of which have been pink diamonds, blue diamonds, and green diamonds. 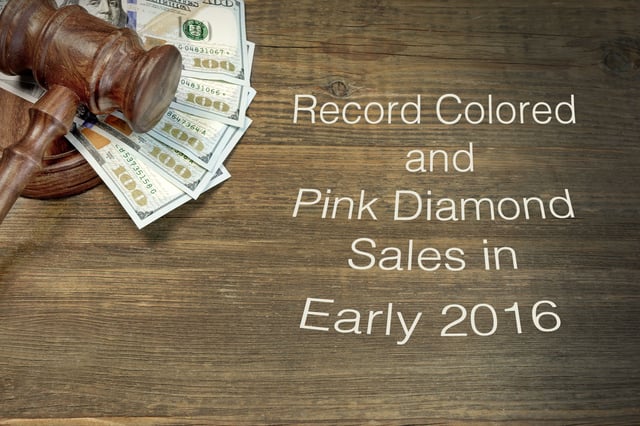 Here are a few of the fancy colored diamonds that have shattered auction records in the first two quarters of 2016:

The Oppenheimer Blue kicked off this year’s auction season with a bang. The 14.62-carat rectangular cut fancy vivid blue diamond was featured at Christie’s Geneva sale of Magnificent Jewels in May of 2016. The legendary diamond was initially anticipated to sell for upwards of $46 million, but it far surpassed that estimate eventually selling for $57.5 million. Approximately 10% of all natural blue diamonds unearthed are larger than one carat; the Oppenheimer Blue is considered a true rarity of nature as it holds the title for world’s largest blue diamond.

The De Beers Millennium Jewel 4 was the star of the night at Sotheby’s Magnificent Jewels & Jadeite auction in Hong Kong in May of 2016. The 10.10-carat oval brilliant-cut fancy vivid blue diamond sold for an astonishing $31.8 million, setting a new record for most expensive diamond sold in Asia. This famous diamond was once part of an exclusive collection of eleven rare blue diamonds owned by the De Beers firm, a collection that took years to amass and includes the most elite and rare blue diamonds including the famous Heart of Eternity diamond. The diamond was unveiled to the public for the first time at the celebration of the new millennium.

The Unique Pink is a 15.38-carat pear-shaped fancy vivid pink diamond, which went under the hammer at Sotheby’s Magnificent Jewels Auction in Geneva in May 2016. The dazzling diamond, sold for a jaw dropping $31.6 million to an anonymous buyer who opted to bid over the phone. The Unique Pink now holds the world record for the most expensive fancy vivid pink diamond sale ever at auction.

2015 wrapped up with some record breaking fancy colored diamonds, as well:

The Sweet Josephine sold at Christie’s Geneva sale of Magnificent Jewels in November 2015 for a record setting $28.5 million; the fancy vivid pink diamond is roughly 16.08-carats and has acquired the title of the largest cushion-shaped diamond to sell at auction.

The Blue Moon diamond headlined Sotheby’s Magnificent Jewels and Noble Jewels sale in November 2015 where it fetched $48.4 million. The astounding 12.03-carat fancy vivid blue is internally flawless and a set the record for blue diamond sales that would go on to be broken by the previously mentioned Oppenheimer Blue Diamond.

For more reading on alternative investments, see the following links: