On the 28th of  May, Philips held their Jewels and Jadeite auction in Hong Kong, and we have to say it had some pretty remarkable lots. In this article we go over our top picks. 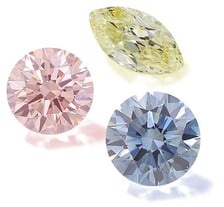 The Philips auction house is not a name that stands out often as it not an auction house focused on attaining and offering record-breaking pieces like Christie’s and Sotheby’s. Conversely, it operates in its own niche, focusing on providing stunning pieces to its bidders rather than multimillion dollar investment assets.

While this year’s auction followed tradition, with record-breaking pieces being absent, there were some lots that caught our attention. This proves that for a piece to be admired, and leave its audience speechless it doesn’t necessarily have to shatter any records.

The most notable lot was a beautiful and unique pair of earrings comprised of Argyle Pink Diamonds. This was quite a big deal because only a handful of pink and red diamonds from this world famous mine have been offered at a public auction in the last 2 decades. 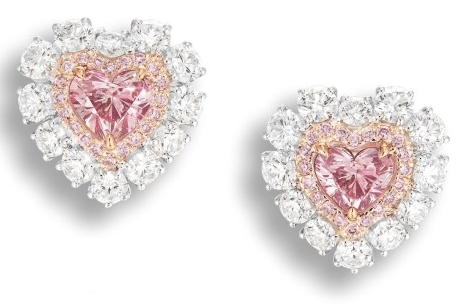 As we know, diamonds from the Argyle Mine, especially those of pink and red color are very hard to find and incredibly sought after due to their excellent quality and impeccable saturation.

Another fascinating thing about these 2 stones is that they had both been featured in past Argyle Tenders. The first gem was a 0.95 carat, heart cut, SI1 clarity, Fancy Intense Pink which started off as Lot #35 from the 2010 Argyle Pink Diamond Tender. The second was a heart cut, 0.84 carat, I1 clarity, Fancy Intense Purplish Pink diamond that was featured on 2013’s Argyle Pink Tender as Lot #54.

Each stone is surrounded by a combination of pink and colorless diamonds, totaling 2.10 carats. The pre-auction estimates for the earrings was between $330k and $380k. While the stones did not have the best clarity grading, their prestige as Argyle diamonds and color saturation were enough to land the diamonds a respectable final selling price of just over $364,000.

Let’s not forget the announcement by Rio Tinto stating that the Argyle Mine is to cease operations in approximately 2 years. With the diamonds from the mine getting rarer and potentially finite, it is only logical that investors and collectors are racing to get their hands on these breathtaking stones. 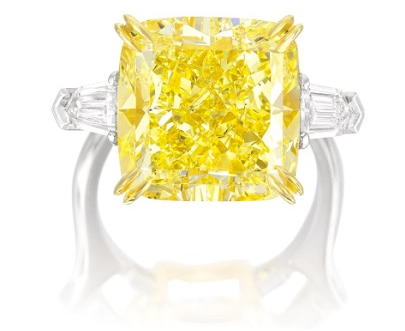 This is a truly breathtaking ring by Graff, featuring a beautiful cushion cut, 12.03 carat, VS1 clarity, Fancy Yellow diamond. Its pre-auction estimates range between $150,000-$180,000. As expected from a piece by Graff, the quality of this stone was enough to easily exceed its high estimate, yielding a final price of $254,900. 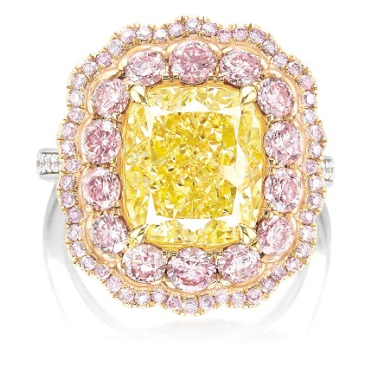 Another beautiful yellow diamond ring was presented, and we must say that it is a true piece of art. The diamond itself weighed in at 5.87 carats, was Internally Flawless, had Excellent polish, and symmetry, and was graded with a Fancy Yellow color grading. To top it all off, the stone was surrounded by 14 round brilliant Argyle pink diamonds which added significant value to the already breathtaking Fancy Yellow. To no one’s surprise, this magnificent piece vastly exceeded its high pre-auction estimate of $165,700, yielding a hammer price of a respectable $255,000. 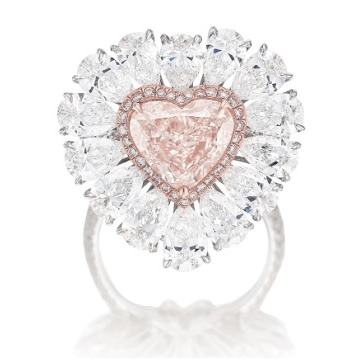 This piece initially grabbed our attention and we hoped it would perform well. The diamond in question is a heart cut,  2.53 carat, VS2 clarity, Very Light Pink. Moreover, the stone is surrounded by pear cut colorless diamonds which really accent the pink gem’s color. The pre-auction estimates for the ring were between $80,000 and $100,000; and while we were confident that it would perform quite well, unfortunately, the lot failed to sell. Nevertheless, we still believe that this piece is truly something to be admired. 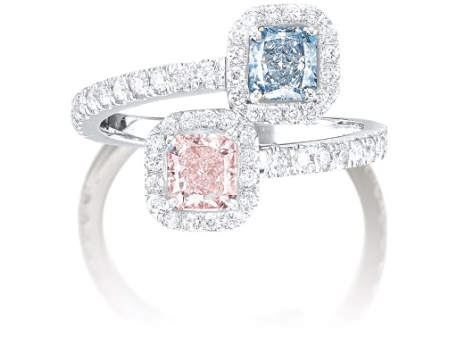 The last piece on our list is a very beautiful ring featuring both a Fancy Blue and a Fancy Pink diamond. The former is a 0.42 carat, VVS2 Fancy Blue, while the latter is a 0.58 carat, VS2 Fancy Pink. The ring was initially valued between $50,000 - $60,000, however, it managed to surpass its high pre-auction estimate by yielding a very respectable $79,660.

What was your favorite piece from this auction? Is there a lot you think should have been on our list? Let us know! And as always feel free to follow us on Twitter and LinkedIn.

For more colored diamond and investing insight be sure to click on the links below: