November had a slew of news on colored diamonds and pink diamonds, including some amazing auctions, alternative investment pieces, and steady increasing interest in pink diamonds. This month we will discuss some of the most popular articles from around the internet on our favorite topic: colored diamonds! 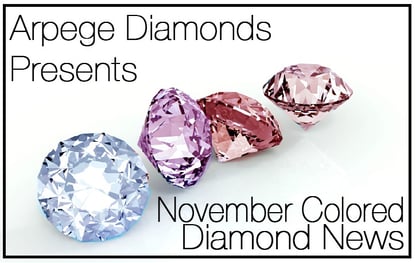 Idex Online reports on an upcoming exhibit at a Los Angeles Museum that will feature rare colored diamonds that hasn't been viewed before in the US. Diamonds: Rare Brilliance will be open to visitors from December 16 through March of 2017. Featured diamonds will include a rare Victorian Orchid Vivid Purple Diamond, The Juliet Pink, and The Rainbow Necklace which features more than 100 colored diamonds of various hues.

Reuter's recaps Sotheby's most recent auction which brought in more than $136 million with several notable colored diamond sales. Among them was a 17.07 carat fancy intense pink diamond that was purchased by London jeweler Graff Diamonds Ltd. The step-cut diamond is set in a ring and sold for a final price of $20.75 million. Other colored diamonds sold at the auction include The Sky Blue Diamond, which was crafted in a ring by Cartier. The 8.01 carat diamond sold for $17.06 million.

Internet Stones discusses the upcoming Christie's Magnificent Jewels sale. Among the colored diamonds being offered are a 12.88 carat fancy intense orangy pink diamond. Pre-auction estimates for the Harry Winston ring place the diamond value between $3.5-$4.5 million. Also being offered is a 54.36 carat fancy deep brownish pinkish orange diamond. Set in a ring with an 18k yellow gold ring, the diamond is expected to bring in between $2-$3 million at the upcoming auction. The last featured stone of the auction is a 6.94 carat fancy vivid yellowish orange diamond that has a pre-auction value of $800,000-$1.2 million.

CNBC covers the recent sale of a 9.14 carat pink diamond at a Christie's Auction in Geneva. The pear-shaped, fancy vivid pink, VS2 clarity diamond was purchased by a private Asian buyer. With a final sale price of $18 million, the diamond reached a $2 million per carat valuation. This makes the stone the second highest price per carat for a pink diamond ever bought at auction. Of the 217 lots offered, the Christie's auction sold 167 of them.

The Courier Mail reports on a trend that we've been covering for awhile now, the growing trend in pink diamonds as alternative investments. The article discusses the steady incline in value over the last 3 years, with pink diamond values growing 30% year over year. Pink diamonds are now 50% more valuable than their colorless counterparts. The piece also discusses the decreasing supply of pink diamonds with the impending closure of the Rio Tinto mine which supplies 95% of the world's pink diamond supply.

For more reading on colored diamonds and pink diamonds , see the links below: