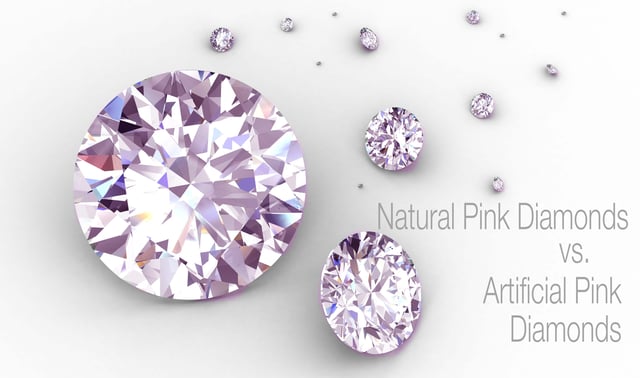 Natural pink diamonds are stunning beauties that are extremely rare and consistently fetch very high prices at auction.  Although much is still unclear on how pink diamonds obtain their color naturally, it is believed that pressure forces the diamond upwards towards the Earth’s surface while compressing carbon into the structure of the diamond. This process creates a deformation in the stone, which enables the absorption of light in a manner that produces the pink hue. Natural pink diamonds often possess natural modifying colors such as red, purple, brown, and even orange. The lower amount of modifying color and the stronger the pink color, the higher the price tag.

Although natural pink diamonds can be found in other locations worldwide, the majority are found in the remote are of Kimberley, Australia where Rio Tinto’s Argyle mine is located. The mine has been operating since 1983 and it currently produces about 90 percent of the world’s pink diamond supply. However, that won’t last much longer as Rio Tinto has announced that production could be suspended as soon a 2020, when the mine reaches the end of its production.

One of the methods is known as lab-grown pink diamonds. These are created in a lab over several weeks, simulating the Earth’s natural conditions needed to create a real diamond. This type of artificial pink diamond can be misleading to the public as they appear almost identical to natural ones and can only be detected by high-tech equipment. Another method to create artificially treated pink diamonds is a treatment known to manipulate the diamond’s current color into a pink hue. Through the irradiation process the diamond is exposed to radiation to alter the position of the atoms within the diamond, resulting in a change of color.

Artificially treated diamonds can be relatively affordable, but they lack the mass appeal, beauty, and rarity of natural pink diamonds. Unfortunately, the popularity of synthetic pink diamonds has increased due to the rise in prices of natural pink diamonds and their scarcity. There is a current wave of replicas and counterfeit pink diamonds in today’s market. This is why it is crucial to purchase from a trustworthy diamond dealer that can provide a certificate guaranteeing the authenticity of a pink diamond investment.

For more reading on pink diamonds and what makes them so special, see the links below: