Just like people, every diamond is unique; each has a certain character and a certain story to tell. But perhaps the most prominent characteristic they share with us is that sometimes their flaws can be their biggest asset. This is precisely the case for the historic Hortensia diamond. 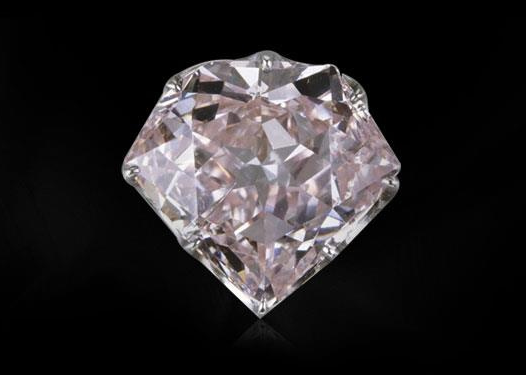 This beautiful 20 carat stone has a pentagonal cut, with a very distinct crack that begins at the edge of the girdle and extends all the way to the culet. Furthermore, it has a very pale orangey-pink hue.

This would normally be considered a negative characteristic, but it actuality it truly is not.

Despite the flaws in its structure and unfavorable combination of hues, the Hortense is actually a very intriguing diamond, full of a unique charisma rarely found in other famous historic diamonds.

How Did It Get It’s Name?

The diamond owes its name to the Queen of Holland, Hortense de Beauharnais, as she would constantly wear it wherever she would go.

The Hortensia was initially listed as the center-most diamond of the French Crown Jewels, which was created during 1691. More specifically it was located on the 3rd of the 19 florets, standing proudly and prominently among the buttonholes of the elegant headdress.

The person responsible for its inclusion on the crown was none other than King Louis XIV, when it came into his possession during 1643. Contrary to popular belief, despite originating from India, the diamonds was not among the plethora of stones the King bought from the famous Jean-Baptiste Tavernier.

The Hortensia was among the jewels stolen from the Royal Treasury during the French Revolution (1792). However, one year later, in a desperate attempt to save his life, a man by the name of Depeyron disclosed a very valuable piece of information, just prior to his execution.

He said that he had hidden a bag containing precious gems in the attic of an old house in the Halles district. Surely enough, the Hortensia was recovered alongside the Regent Diamond, and a plethora of other stolen jewels.

After that, the diamond was again mounted on the fastening of Napoleon’s epaulette braid, during the First Empire. However, in 1830 it was stolen once again, this time from the Ministry of the Navy, but thankfully, it was swiftly recovered.

The stone changed ownership once again, finding itself in the hands of Empress Eugénie in 1856. This time, the Hortensia was set in the center of the diamond-encrusted comb made by the Court Jeweler, Bapst for the empress.

Where It Lies Today

Fast-forward to 1887, the Hortensia, along with the Regent were the only stones excluded from the great sale of the French Crown Jewels, due to their immense historic and artistic important.

These diamonds would later be put on display in the Louvre, where they would be joined be the famous Sancy diamond just about under a century later.

For more famous pink diamonds check out the links below