Fancy yellow diamonds continue to sell at record setting prices as now, more than ever, diamond enthusiasts are recognizing the true potential of this captivating color. Arpege Diamonds’ latest addition to the Famous Diamond Series is the larger than life Sun-Drop diamond. 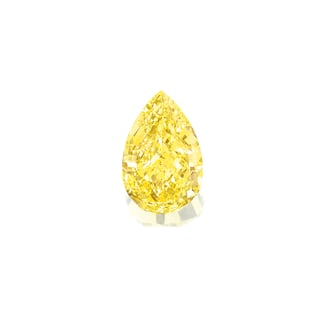 The striking yellow color of these diamonds surpasses the other factors used to evaluate diamonds such as carat size, clarity and cut. Yellow has increasingly become one of the most desirable color of fancy diamonds among diamond collectors and investors, since they have fetched extremely high prices at auctions in recent times.

Unlike other famous diamonds that Arpege Diamonds has featured, the Sun-Drop diamond is relatively new and lacks historic ownership. However, the Sun-Drop already ranks as of one of the world’s most noteworthy diamonds for its size and color. The Sun-Drop diamond was unearthed in South Africa in 2010, receiving a grading of fancy vivid yellow by the Gemological Institute of America, the highest color grading for a yellow diamond. This grading makes this unique stone the largest known pear-shaped fancy vivid yellow diamond in the world.

The exceptional diamond weighs 110.03 carats, which is approximately the size of a woman’s thumb. Its clarity has been graded as VVS1, meaning the diamond has very slight inclusions that can only be observed by an expert using a 10x microscope.

After intensive research, experts argue that the Sun-Drop diamond formed deep within the Earth’s crust nearly 3 billion years ago as nitrogen integrated in its carbon crystal structure producing its yellow color. The diamond then traveled upwards where it was discovered within a Kimberlite pipe in South Africa. After six months of cutting and polishing by Cora International, the pear shaped cut diamond exposed its true vivid yellow color.

Following its remarkable discovery and intensive months of work to perfect it, the Sun-Drop was showcased at the Natural History Museum in London for a six-month period where it captured the attention of everyone who was fortunate enough to see it in person.

In November 2011, Cora International put up for auction the diamond at Sotheby’s of Geneva where it sold for a whopping $12.36 million, setting a record price for a yellow diamond. Its current owner and location remain unknown. With its unusual size and captivating rich color, the Sun-Drop has become a one of a kind yellow diamond with a powerful presence that captures the attention and imagination of all who come across it.

Although its future is yet to be known, because of its rare characteristics this unique diamond will sure be part of history as it accumulates stories of ownership and value. Natural yellow diamonds have gained a global recognition between diamond enthusiast and connoisseurs for their enchanting color and unusual characteristics, of course these may come in all shapes and sizes however, is the ultra rare such as the Sun-Drop diamond that cause a stir among people.