As you already know, Arpege Diamonds is on a constant journey to discover and present to you the world’s most enchanting famous diamonds. This time we are here to talk about a truly beautiful yellow diamond, recognized worldwide for its superior size and dazzling color. It is none other than the Tiffany Yellow.

In recent years, Fancy Yellow diamonds have become somewhat of a trend among Hollywood stars and haute couture runways, yet only diamond collectors and investors can detect the true potential of a yellow diamond in today’s market.

The Measurement of Their Beauty

As we saw in our Yellow Diamond Facts and Tribute to Yellow Diamonds articles, Fancy Yellow diamonds are graded according to the hue of yellow within the stone, ranging from a dim light yellow to a mesmerizing fancy vivid.

The color of the latter is often referred to as “Canary Yellow,” signifying the a yellow color of the highest quality and saturation.

Despite yellow being among the most common color category, Canary Yellows are the hardest to find and subsequently the most expensive on the yellow scale. Aside from color, the cut of these diamonds often plays a significant role in the value since various cuts can enhance the color intensity more than others.

Although yellow diamonds are not the most rare of the Fancy Colored diamonds, the demand for yellow stones continues to steadily increase, resulting in the rise of values. Many of the highest prices at auction have actually derived from yellow diamonds, such as the Graff Yellow, which sold for $16.3 million, making these a solid stepping-stone into the market of fancy colored diamonds as alternative investments. 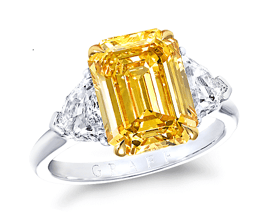 Aside from the massive price tags yielded by the Canary Yellows, most yellow diamonds remain more affordable than other fancy diamond colors, and still constitute for a very precious gift among many.

The Origins of a Legend

The Tiffany Yellow is known as one of the world’s largest diamonds ever discovered. However, many conflicting stories have been passed along through the years about its true origin. For the most part, it is believed that this massive 287.42 carat gem originated in one of the Compagnie française de Diamant du Cap mines of South Africa, more specifically from the Kimberley Mine, between 1877 and 1878.  The gem was also believed to be possibly owned by the De Beers Mines, a French company.

In 1879, the diamond was purchased for $18,000 by the Tiffany & Co. branch in Paris, where the cutting and polishing was lead by gemologist George F. Kunz. After one year, the finished result by the distinguished gemologist was a 128.54-carat cushion-cut brilliant gem with a total of 82 facets revealing its stunning brilliance and captivating color. After its transformation, the Tiffany Yellow is a prime example of the “Canary Yellow” hue. 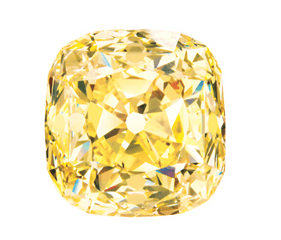 Over the years, the diamond has been displayed at Tiffany & Co. stores as well as several exhibitions worldwide, including the Smithsonian National Museum of Natural History, The Chicago Columbian, The Pan-American, and The New York Worlds.

The exquisite stone has only been worn on two occasions. Once at the 1957 Tiffany Ball by Sheldon Whitehouse and once 1961 by Aubrey Hepburn, for a photograph promoting the famous movie Breakfast at Tiffany’s.

The stone was set on a brooch named “Bird on the Rock” which was also designed by one of Tiffany’s & Co. jewelers.

In 1972, the unmounted Tiffany Yellow diamond was advertised for sale in the New York Times for $5 million during a flash sale that lasted only 24 hours and resulted in no buyer. Since then, the diamond remains on display permanently on the main floor of Tiffany’s & Co. Fifth Avenue store in New York.

If you found this article interesting be sure to check out the history of more famous yellow diamonds here. And as always feel free to follow us on Twitter and like us on Facebook.