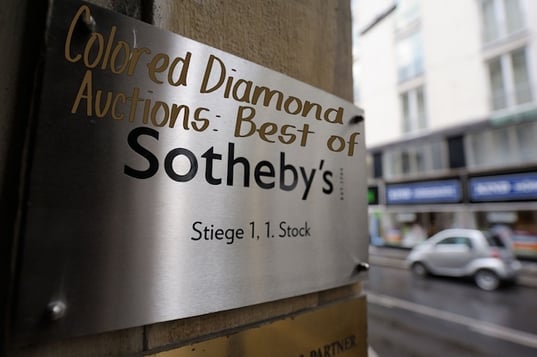 In 2015 at the Geneva sale, a Fancy Vivid Blue 12.03 carat diamond named the Blue Moon sold for $48.5 million. This set a world record for price per carat of a diamond sold of any color.

Prior to the sale of the Blue Moon, The Graff Pink held the previous record for the most valuable diamond sold at auction. The Fancy Intense Pink 24.78 carat diamond sold in Geneva in 2010 for a jaw-dropping $46.2 million.

The record for yellow diamond sales goes to The Graff Vivid Yellow. The enormous 100.09 carat diamond sold in May of 2014 for $16.3 million.

The Mandarin Orange is a Fancy Vivid Orange 4.19-carat diamond.  It sold in 2011 for $2.9 million, which set the record for orange diamond sales that year. While orange diamonds are not the most sought after in the color spectrum, their rarity gives them an inherent value which drives their price up when they make it to auction. 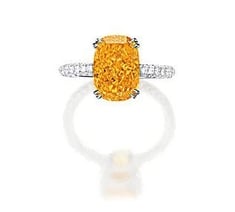 Brown diamonds are much more common in the colored diamond world. A 65.57 carat dark orange-brown diamond named The Golden Maharaja sold at Sotheby’s for $1.4 million. Despite being frequently discovered, the extra facet pattern in this particular diamond drove its value up above the $1 million mark.

The Unique Pink is a Fancy Vivid Pink diamond weighing in at 15.38 carats. The diamond was sold in May of 2016 at a Sotheby’s auction and brought in more than $2 million per carat, with a final sale price of $31.6 million.

Sotheby’s managed to amaze us once again this year with pieces that were not only able to set new records in their category, but also shatter every previous record set by diamonds sold at a public auction.

During the May 16 auction, les pièces de résistance were the “Apollo Blue” and “Artemis Pink” diamonds. These two pieces were considered to be the most important earrings ever to have appeared at a public auction, and for good reason. Together these two diamonds are in a league of their own, fetching over $57 million and becoming the most expensive pair of earrings to ever be sold at an auction.

Both of the pieces were purchased by the same buyer and would ultimately have their names changed from Apollo Blue to "The Memory of Autumn Leaves" and from Artemis Pink to "The Dream of Autumn Leaves".

Prior to this year, the title of most valuable diamond in the world belonged to the Oppenheimer Blue. Known as the “gem of gems;” this 14.62 carat, rectangular cut, Fancy Vivid Blue diamond sold for an astounding $57.5 million (approximately $4million/carat) during 2016's Christie’s Geneva Auction.

Previously, the record holder for most expensive pink diamond to ever be sold at a public auction was the Graff Pink (as we saw above). The 23.88 carat, rectangular cut Internally Flawless, Vivid Pink diamond set new records at Sotheby’s 2010 Geneva auction fetching $46 million (yielding almost $2million/carat).

Despite their magnificence, both of these stones would eventually be dethroned by the Pink Star. This 59.60 carat, oval mixed cut, internally flawless, Fancy Vivid Pink masterpiece with an IIa grading managed to shatter all previous records, fetching a jaw dropping $71.2 million. Today the piece is the proud possession of renowned Hong Kong Jewelry Retailer Chow Tai Fook.

Will We See More?

It has been without a doubt a very exciting year for diamond enthusiasts and investors. With autumn and winter months bringing a plethora of anticipated auctions and tenders will we see more record breaking stones? And another question that we are all probably thinking, will there ever be a diamond to dethrone the breathtaking Pink Star? We will have to wait and see.