Best of the Best: Brown Diamonds

Red, blue and pink diamonds tend to grab the headlines (and the highest prices) due to their relative scarcity.  If one were to look to the opposite end of the colored diamond scarcity spectrum, they would find the brown diamond.  These tend to be the most natural colored variety of natural diamonds. Most recently, the Merlin diamond mine unearthed the fifth largest diamond found in Australia weighing 35.26-carat.

In the spirit of the Merlin diamond mine unearthing such a unique brown stone, Arpège Diamonds looks at the most famous brown diamonds in the world. 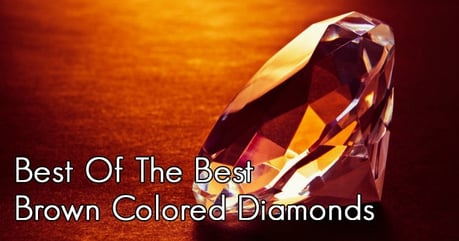 The most famous brown diamond by far is the Golden Jubilee Diamond. It is estimated to be worth upwards of $12 million and weighs a whopping 545.67-carats. It currently holds the record for largest faceted diamond, beating the Cullinan I at its discovery in 1985. The diamond got its name in 1997 when it was presented to the King of Thailand. Golden Jubilee was his 50th anniversary of his coronation. You can read more about the brown diamond here. 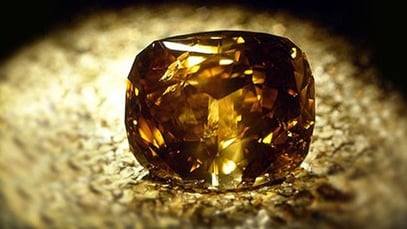 Weighing 65.57-carats, the Golden Maharaja is a fancy dark orange brown pear shaped diamond that has a clarity of VS2, one of the top clarity awarded to diamonds. The most recent transaction of the diamond was in 2006, when Sotheby’s New York sold it at an auction for $382,400.

The Earth Star Diamond was found in the Jagersfontein Mine in 1967. During the recovery process, the diamond surprisingly slipped through all the way to the grease table. The rough stone weighed 248.9-carats in the rough before being bought and cut by the Baumgold Brothers. Today, the beautiful stone sits as a pear shaped diamond weighing 111.59 - carats.

Listed as one of the largest brown colored diamonds in the world, The Great Chrysanthemum Diamond is absolutely massive for a colored diamond. It was found in 1963 in South Africa, weighing 198.28-carats. Within the same year it was found, the diamond was bought by Julius Cohen, a jewelry designer from New York. Currently, the diamond sits as a pear shape, fancy brown diamond weighing 104.16-carats.

When it comes to colored diamonds, knowledge is your best asset. Subscribe to our blog to continue reading our insight or feel free to contact us at Arpège Diamonds to talk with industry experts.