If you like Blue Diamonds, then you were in for a treat at Christie’s December 6th Magnificent Jewels sale held at Rockefeller Center in New York. 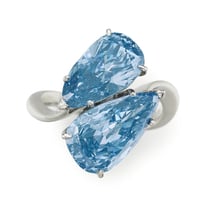 All in all, the auction went quite well, achieving slightly over $62.5 million and featured some unexpected entries to be featured in the top 10. Let’s briefly look at the top lots…

Le piece de resistance of the auction was a crossover platinum ring designed by Graff.

The piece features two brilliant-pear cut, Fancy Vivid Blue stones. The first weighing in at 3.36 carats, and having a VVS2 clarity grading, and the second standing at a slightly smaller 2.71 carats with a VS1 grading.

All together the ring sold for over $12.5 million, far exceeding its $8.5 million pre-auction high estimate.

While the Graff Blue left everyone in awe, 2 colorless diamonds also managed to impress visitors, shattering their pre-auction high estimates. Let's briefly look at both:

A Gem To Remember

While not a fancy colored or colorless diamond, the Belle Époque Kashmir sapphire rightfully took its place among the top 10 lots of the auction. The 11.81 carat stone was embedded in a beautiful diamond ring and sold for a very respectable $1.7 million, exceeding its $1 million pre-auction high estimate.

The Top Lots for Signed Jewelry

Signed jewels were also extremely popular. Among the most notable sales were:

A beautiful diamond cluster circlet necklace designed by Harry Winston made a strong appearance among the featured signed pieces. The lot was sold for a respectable $1.8 million, remaining within the pre-auction estimates.

JAR also made a notable appearance with the truly magnificent multi-gem “Flower” ear pendants. The pieces featured a myriad of purple, violet, blue, clear, yellow, and green stones of various cuts and carat weights. All together, the lot yielded a little over $1.2 million, also falling within its pre-auction estimates.

Rivière presented a beautiful necklace; with a platinum base, the piece was set with a graduated series of 46 brilliant, round cut diamonds. The piece easily sold for $1.1 million, exceeding its pre-auction high estimate of $1 million.

An item that surprised most with its appearance in the top lots was Van Cleef & Arpels’ natural pearl and diamond pendant earrings. Measuring 11.90-11.95 x 22.50 mm and 11.35-11.40 x 21.50 mm respectively, the pearls were mounted in a beautiful platinum embedded with small round cut diamonds. The earrings managed to yield a respectable $972,500, falling within their pre-auction estimates.

While the above pieces were absolutely stunning and highly anticipated to perform well, there were 2 lots that managed to surprise everyone with their appearance in the top 10 sales. These were:

The Biggest Surprise of All 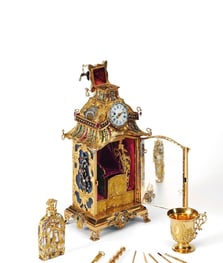 The final piece on our list is another item that surprised many with its appearance in the top lots sold. The George III Jeweled Gold and Hardstone Nécessaire and Watch, is an elaborate casket set.

Sitting upright, the piece is set with with hundreds of diamonds, rubies and emeralds of multiple sizes and cuts. The lot managed to sell for over $1.5 million. Unfortunately, a pre-auction estimate was never provided, further supporting everyone’s surprise with this beautiful item making it to the top sales.

And there you have it, some top picks from the top lots sold in Christie's December sale. Which were your favorite items?

For more colored diamond insight, check out these articles you might find interesting: