The world of colored diamonds is constantly changing, with new and exciting news constantly hitting the web. From amazing auction results to fantastic diamond finds, Arpege Diamonds is bringing you all the news you may  have missed during August. 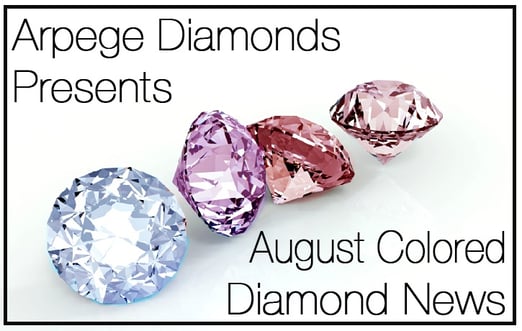 ALROSA announced the auction of a 402 carat rough diamond at their upcoming event in September. Additionally, ALROSA will be offering a 40.25 carat polished diamond which is one of 19 diamonds that will be offered at the event. Over 30 companies will participate in the auction which will run from August 23rd to September 3rd.

Intrigue and Greed: The Failed Auction of a 1,109 Carat Diamond

Lucara Leaves Door Open to Another Auction for Whopper Diamond

Lucara, the mine who found the 1,109-carat Lesedi La Rona has gone on record in stating that it is possible the diamond will again make its way to the auction block. The diamond, which was found in Botswana, was offered in its rough form, as opposed to the polished colored stones that have been setting records throughout 2016.

Rappaport's Diamond News reports that Lucara is investing in new technology to find diamonds within their mines. Included in these technology options is X-ray Technology (XRT) which was used to find the previously discussed Lesedi La Rona. The mine is looking to maximize productivity, thus increasing their output in an industry where every stone found could net millions.

Aerospace company Lockheed Martin is throwing its hat in the ring of 3D-Printed Diamonds by filing a patent to corner the market. While the company is more well-known for its endeavors in aircraft machinery, they have a leg up on the technology side of 3-D diamond production. We will certainly be paying close attention to the advancements of this industry giant.

Pink diamond mining giant Rio Tinto has opted to end its efforts into building an Indian diamond mine. The company declined to comment on the reason for their departure from the project, amid speculation that the environmental ministry of Indian was opposing the project. While some famous diamond have been found in the region in past centuries, there currently is no major diamond mine within India, an absence that Rio Tinto was hoping to capitalize on.

For more industry news, see the links below: