Being the month where we celebrate the Irish patron saint, we want to pay tribute to another breathtaking green diamond. While not as historic as the Dresden Green or valuable as the Aurora Green, this diamond has a certain captivating character which easily places it among the greatest green diamonds to have ever been discovered. 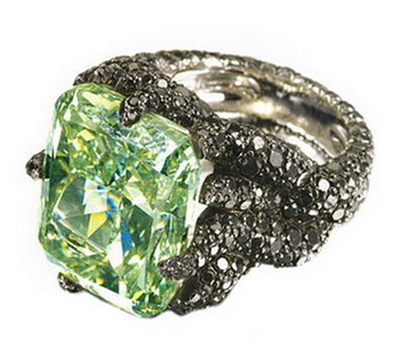 Beginnings and Transformation of this Green Diamond

The Gruosi Green diamond is of South African origin, but other details of the early history of the diamond such as the mine of origin, date of discovery etc. are not known.

Initially weighing approximately 100 carats, the rough was purchased by Fawaz Gruosi during 1998. From there, Gruosi had ¾ of the stone’s weight shed, transforming it into a truly breathtaking 25 carat, cushion cut, Green diamond. While the clarity of the diamond has not been disclosed, in a statement Gruosi said it has a “near flawless” grading.

Characteristics of the diamond

Despite losing 75% of its weight, it is still the second largest naturally green stone, eclipsed only by the historic Dresden Green. However, this is not the diamond’s most impressive feature.

As you might remember from our Tribute to Green Diamonds, we had discovered that due to the way these stones are irradiated their color is usually confined to the outer layer, essentially creating the so called “skin stones”. In this situation when a green diamond is cut and polished it could potentially lose large amounts or even the all its color, leaving an otherwise radiant green gem, pale, patchy, or even colorless.

In the case of the Gruosi Green diamond, the color is evenly distributed throughout the crystal. This means 2 things, the diamond did not lose much of its saturation (even after shedding 75% of its weight), and it will have an equally beautiful and radiant green color regardless of the angle in which it is viewed.

Having perfect color distribution is extremely rare for natural green diamonds, as it is the result of the stone being exposed to beta and gamma radiation, which are capable of penetrating the crystal at a much deeper level, thus increasing the radiance of the color. Such an occurrence is much less than 0.1% in the world of naturally colored diamonds.

The final characteristic that makes this stone significant is that it is a Type IIa. Such diamonds are extremely rare, and are essentially free of all other chemical impurities in their carbon structures (such as boron, hydrogen, or nitrogen).

The only other green diamonds of this caliber are the Dresden Green, Ocean Dream, and the recently discovered and record holder for green diamonds Aurora Green. This gives an indication as to the rarity of these diamonds.

Currently the diamond has been set in a beautiful gold ring, surrounded by 382 smaller mesmerizing, 7 carat black diamonds. While such settings and combinations are considered out of the ordinary for the diamond world, the final product looks absolutely stunning.

"The principal of creativity to do something different is my credo," said Fawaz in an interview given to CNN's Monita Rajpal in February 2006.

As the month of St. Patrick slowly comes to a close, why don’t you let us know which green diamond is your absolute favorite. Leave a comment and as always feel free to follow us on Twitter and like us on Facebook.

For more interesting facts about colored diamonds and investing insight be sure to check out the articles below: