Posted by Tony Cathaway on 6/12/18 9:02 AM
Not all of the great and famous diamonds of the world are accounted for in auction houses or reside in the collections of crown jewels that reflect the grandeur of empires gone by.
One such gem is the Argyle Pink Jubilee; one the most spectacular stones we have ever seen. This diamond is one of the most captivating stones ever unearthed, and a stunning example of the diamond cutter’s masterful fusion of art and high technology. Let's find out a little more about this truly amazing gem. 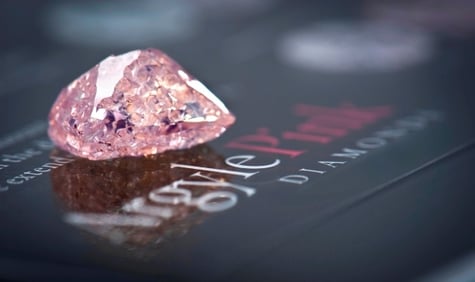 Unlike most diamonds of similar caliber that were found in the ancient mines of India, the Pink Jubilee was found in a mine that is very dear to our hearts, the Argyle Mine.
The Argyle Mine is without a doubt one of the greatest diamond mines of our time. The East Kimberly mine located in Western Australia is the main supplier of the exceptionally rare pink diamonds of immense quality and saturation.
The story of our stone begins one fateful day in August 2011 where it was unearthed as a 12.76 carat, light pink rough. Upon its discovery, it was said that the Jubilee was truly one-of-a-kind, as it was the largest pink diamond rough to have ever been found in the mine’s almost 30 years of business. 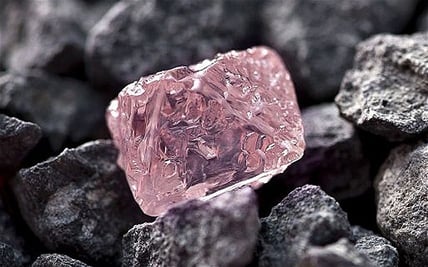 It is a known fact that pink diamonds are very rare (among the rarest of colored diamonds) but large pink stones are even harder to come across. With the Jubilee being of such size and saturation, experts of the mine stated that it would be very unlikely that they would ever be able to find another stone of such caliber.
Pink diamonds are so incredibly rare that Christie’s auction house has auctioned less than 20 polished pink diamonds in excess of 10 carats in nearly 250 years of history - including the hotly contested sale of what is thought to be the Princie Diamond.

With the market so hot for pink diamonds, prices can regularly exceed $1-2 million per carat at the annual Argyle Tender, and fresh out of the ground, the diamond was estimated to be worth in the tens of millions at auction. Since the mine produces only a handful of stones over 1 carat each year, it was speculated that even by size alone, the Jubilee could command a stunning price.
With such promise, anticipation was rising as the stone was being ready to be handed off to expert diamond cutter Richard How Kim Kam in Perth, close to the beginning of 2012. The entire transformation process of cutting and polishing the stone was expected to take no more than 10 days and everyone's excitement was becoming apparent.

The Beast Within Beauty

As the cutting process began, certain issues came to light. Along with a series of little flaws, the stone had a major internal fault line that put the entire stone in jeopardy. Rather than risk completely destroying the diamond, Rio Tinto decided to halt the cutting process. While still valuable in terms of size and color alone, the record-setting stone was ultimately donated to the Melbourne Museum Victoria. The now 8 carat, Argyle Pink Jubilee was set as part of their permanent collection, where it sits proudly on display in the museum’s Dynamic Earth Exhibition.
There is still widespread debate stating that the stone could still be cut into 2 smaller pieces along the fault line and recut into two gems, however, there seem to be no such plans for this.
A large number of pink diamonds currently rest in private hands either as jewelry, or kept in vaults as investments. The opportunity for the public to see and understand these wonderful stones can only help future generations appreciate diamonds both as works of art and as a product of billions of years of geological processes.
Do you have a favorite pink diamond? Let us know! And as always, feel free to follow us on Twitter and LinkedIn!